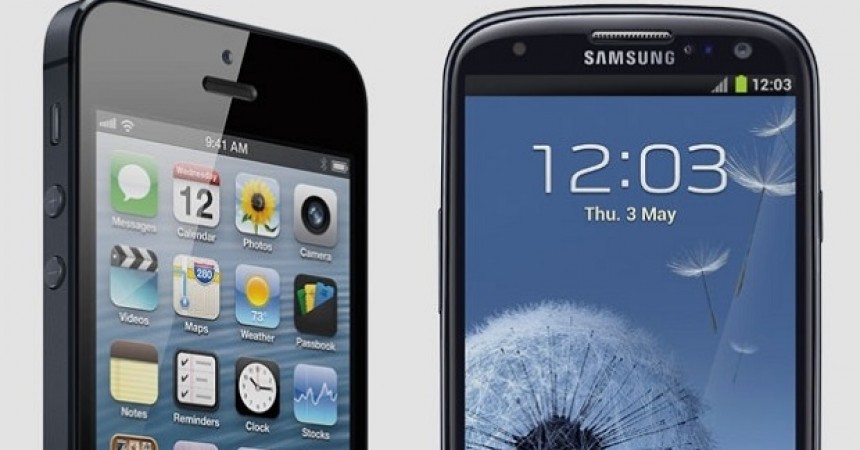 Until we can expect the launch of the Apple iPhone 5S somewhere by the end of 2013, Samsung’s all new Galaxy S4 is expected to rule the smartphone industry without a doubt. But the only phone that can equal its features and performance is the iPhone 5, which is the most serious rival present out there. In this article lets compare the two giant manufactures with their best products fighting for the No.1 title in the smartphone market.

Starting with the DESIGNS of the phones, both of them are pretty sleek with a thickness of 7.7mm but the S4 comes with all plastic finish with the same old design like the “S” series while the iPhone 5 have an aluminium and metallic finish which gives it a more elegant look as compared to Galaxy S4. Also the Galaxy S4 is heavier than the iPhone by 23 grams, thanks to its huge screen and plastic body.

Samsung Galaxy S4 has a Super AMOLED 4.99-inch screen with 1080p display whereas the iPhone has an IPS screen with 640 x 1136 pixel display. Though the screen size of S4 can cause some handling problems but if you are a fan of gaming and movies it is best designed for you. You keep the iPhone next to the S4 and it would literally look like a toy. Also the AMOLED display has an edge over the IPS display with better viewing angles. The screens on both are fairly responsive and have no issues at all.

Let’s move on to one of the most important features that is STORAGE, the iPhone 5 does not use the micro SD slots whereas the Samsung S4 do. Both phones comes with 16gb, 32gb and 64gb variants but the Galaxy S4 have an edge with its SD storage which makes the storage on it dirt cheap.

When it comes to the CPU and GPU, S4 works on Qualcomm Snapdragon 600 1.6GHz CPU with 2GB RAM while the iPhone 5 works on Apple A6 dual-core 1.2GHz and 1GB RAM. Though iPhone’s 1.2GHz sounds less powerful but reality is it’s A6 processor is more powerful which comes as a minor victory over the S4. Next we take a look at the SOFTWARE, The iPhone 5 works on Apple’s iOS whereas the Samsung Galaxy S4 works on Android Jelly Bean 4.1.2. Though being phones of different platforms comparing the software will not be a good choice, though both perform good in their own ways. You can get access to set of cool apps on both the devices and the performance on both is fairly responsive.

So in many respects the Samsung Galaxy S4 easily beats the Apple iPhone 5 in general, but for some users out there screen size can be a deciding factor, where  Galaxy S4 out as a clear winner considering the low price tag. But if you want a device with classy & premium experience sacrificing some of the major features of 2013, you should definitely go for iPhone 5.

Evernote Food 2.0 Has Launched On Android For Food Lovers!

How To Boost The Cell Phone Signal?

Top 5 Useful USB Gadgets You Must Have