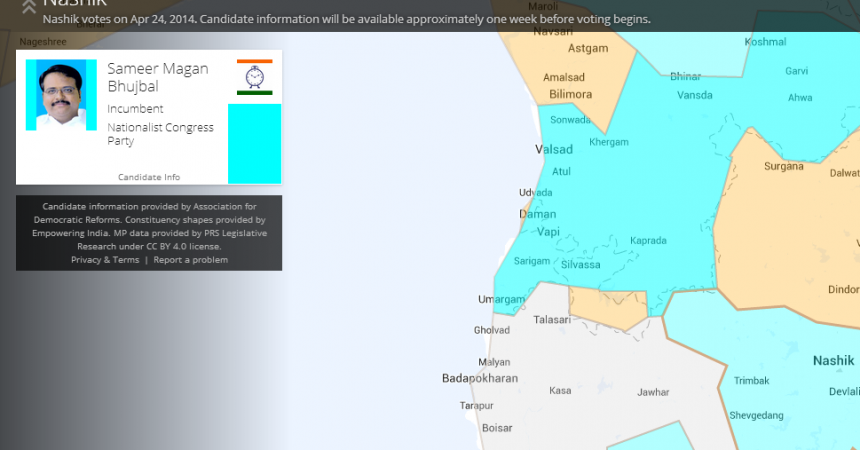 New Delhi, April 8, 2014: Google today announced the launch of a new tool as part of its elections portal offering ‘google.co.in/elections’, called ‘Know Your Candidates’. The new tool will allow citizens to get easy access to relevant information about political candidates contesting from their constituency and their incumbent Member of Parliament. This tool integrates publicly available information sourced from Indian organizations such as the Association for Democratic Reforms (ADR), PRS Legislative Research and Liberty Institute India.

The tool will provide valuable information for each sitting Lok Sabha MP and contesting candidates such as their disclosed educational background, financial details and social media presence (wherever available) including video bios of the candidates provided by Ping networks. Mapped onto Google Maps interface, citizens will be able to find the information by using pin codes of their area or by zooming on their locality on the map. The tool will be updated regularly to provide information about all candidates as they get finalised and will be made available at least a week before the voting day in each constituency.

Prof. Trilochan Sastry, a founding member of ADR applauded this launch saying,”We are delighted to collaborate with Google to launch this tool, which will help our concerted effort to disseminate to the citizens of India the background information of the candidates contesting the Lok Sabha 2014 elections that will enable them to make an informed choice during voting. As citizens we have to play a proactive role in ensuring that we choose politicians who are clean, honest and committed to the progress, security and development of the people of India, and we at ADR have been working on deeper reforms including political party reforms and in the last few years have obtained several landmark judgments from the Supreme Court and Central Information Commission.” Commenting on the launch, Rajan Anandan, VP and Managing Director of Google India, said “In the last five months, we have made a concerted effort to provide our users a one stop destination for all their information needs for the upcoming Lok Sabha elections. With the launch of this tool, we have added all the important information of the contesting candidates with the help of groups such as ADR and PRS Legislative Research who have been doing a stellar job of collating all the important information about the candidates. We hope that making this information easily accessible will help Indian voters learn more about candidates running for public office and help them to make an informed decision.”

The Google Elections Hub is an online hub for elections-related news and information created to help 800 million Indian voters stay informed and updated about the elections. The site also includes features such as elections related News Videos, Search Trends, G+ Hangout Series, and an interactive Pledge to Vote campaign.

Google created its first elections tools seven years ago when our engineers noticed a huge increase in search traffic around the election period in the United States. Today over 20 countries including Malaysia, Thailand, and now, India have elections pages that aid voters during election periods. Google aims to encourage people to be more participative and engage with candidates. It also allows voters to have a deeper understanding of politics and governance through engagement with the candidates.

6 Super Secrets Of The Ecommerce Design For Better Customer Experience

Top 5 Television Shows That Will Bring Your Childhood Memories Back

How To Get Google+ Short Name For Free