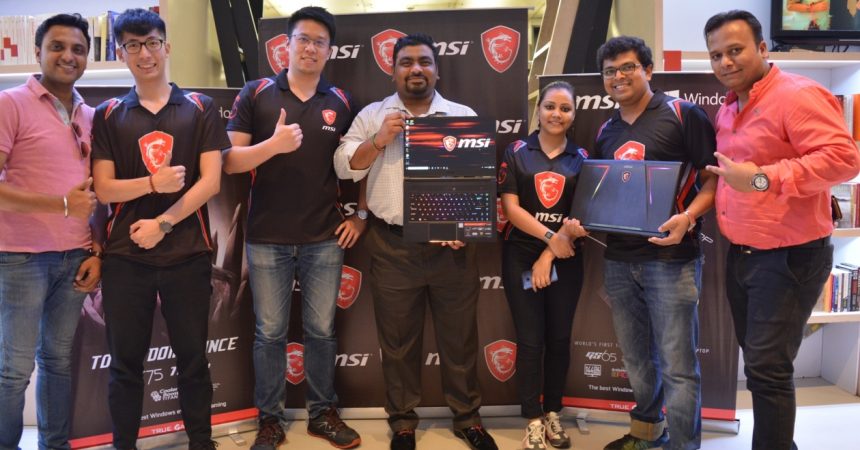 MSI, the world leader in gaming hardware, announced a series of gaming laptops powered by Intel 8thGeneration processors, with the launch of its three new models: the GS65 Stealth Thin, GT75VR Titan and GE Raider RGB Edition. MSI has also updated 8thgeneration processor to its GP, GL and PE lines. The newly launched series can be pre-ordered on Flipkart, Paytm and other Authorized sellers in India. The 8th Gen laptops will also be available at any MSI authorized seller by end of April 2018.

To promote its latest 8thgeneration products, MSI is planning to organize several events across India. In a recent announcement, MSI stated that they are all set to open an exclusive store in Pune in the month of May. To serve MSI customers better, MSI also extends its service coverage from 11 cities to 32 cities. The series of events reflects MSI’s plans to reach out to the gaming segment of India laptop market in the year 2018.

GE Raider RGB edition, perfectly crafted for ultra-illumination with RGB lighting on the top cover, keyboard and USB ports, design concept originated from the sports car and the PC Master Race’s love for RGB. The top cover features 24 separate zones of RGB lighting with more than 16.8 million colors available. For the configuration, GE Raider RGB edition is equipped with the latest 8thgeneration Intel Core i7 processor, NVIDIA GeForce GTX 1070 graphics, Cooler Boost 5: the most state-of-the-art cooling design powered by MSI and a display up to 120Hz 3ms or 4K IPS-Level panel. With Nahimic 3, Killer networking, Bluetooth 5.0, and much more gaming features, the GE63/73 Raider RGB undoubtedly stands out from the crowd. The GT75 Titan is the first gaming laptop that can go up to Intel Core i9 processors with fully unlocked hexa-core performance. Combined with MSI’s Cooler Boost Titan cooling design, the six-core 12-thread configuration results in up to a 70 percent performance leap over the previous Core i7.With features such as the core of the flagship model- The Rapid Mechanical RGB keyboard and world’s first laptop introduce with the 10Gbps Killer Ethernet, gamers will be completely immersed in smooth and lag-free gaming experience with or without plugging into Ethernet.

In addition to all the exciting new products listed above, laptops across MSI’s lines are getting updated with the newest 8thgeneration processors including new GT83, GP, GL and PE series. New GP and GL series laptop now has a brand new look with enhanced sound performance powered by MSI Giant Speaker. The cooling module is also evolved from previous “Cooler Boost 4” to “Cooler Boost 5” as well.

Angel Broking Revolutionizing Investments Through the Launch of ANGEL BEE

How to Create an Incredible Gaming Set Up

Getting Real with Virtual Reality