[paragraph]Based on the sequel film to the original Series, Mad Max Fury Road brings the experience back to the fans, with amazing gameplay and next generation graphics.[/paragraph]

It’s the story of Max who’s lost in the ever expanding wasteland, where  he has to survive through the maniac enemies and their brutal cars. The different parts of the wasteland are controlled by respective warlords. Some of these warlords possess threat to Max while some are willing to help him in the journey.

Things like water, food, fuel, ammunition are scarce and hard to find, so it must be used wisely. Max has lost all his good and bad memories, so while he strives to find his tools to survive; he comes across some history relics that gives him glimpse of his past, a hope that keeps him alive.

This is an open world game which means that you can go to any place, interact with any object in the huge dessert also known as the Wasteland.

Your car is the ultimate key to survival. If there is no car (also, if there is no bad-ass car), you don’t have to wait long, before some crazy Scrotus goon will make you the victim of a road kill. And so our main character Max, depends on his car named Magnum Opus. 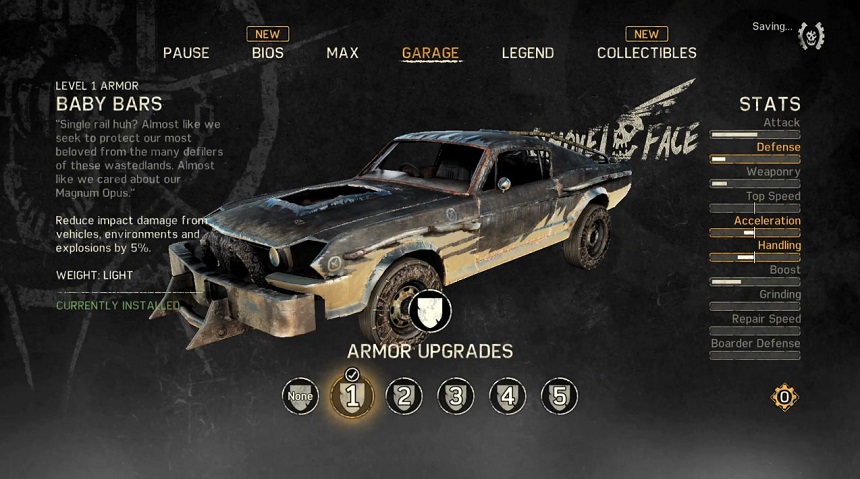 Scrap is the currency in the wasteland, so with the help of collected scrap metal, Max can modify any part of his car. You can also crash into other cars and by destroying them, collect more scrap. There are various scavenging points where you can find more scrap metal. So in order to build your ever expanding inventory of bad ass car parts, you are constantly in the quest of collecting it.

Apart from max, there are various important characters in the game like Chumbucket. This maniac grease monkey can fix any car in a short time. In fact, the Magnum Opus is the ultimate work of Chum, and he believed in Max being his ultimate master and follows  him in every way possible. Max finds a dog, which he puts into Chum’s buggy, and uses this dog to identify minefields and clear them. With Chum being always travelling with Max at the back of his car, he doesn’t have to worry about doing quick fixes during car battles.

Another interesting character Griffa, who brings mythical touch to this story of Max re-discovering himself. Everytime he shows up in the game, its for telling Max a little new thing from his past. We collect tokens during our journey in the wasteland, that can be exchanged with Griffa, to increase Max’s different abilities.

There are many warlords having a strong holds of different parts of the wasteland. Some of these warlord’s loyalty can be earned by destroying their enemy’s posts and thereby decreasing threat level of their region. By earning these warlords loyalty, they let us inside and help us build our car and provide us shelter and other necessary things. 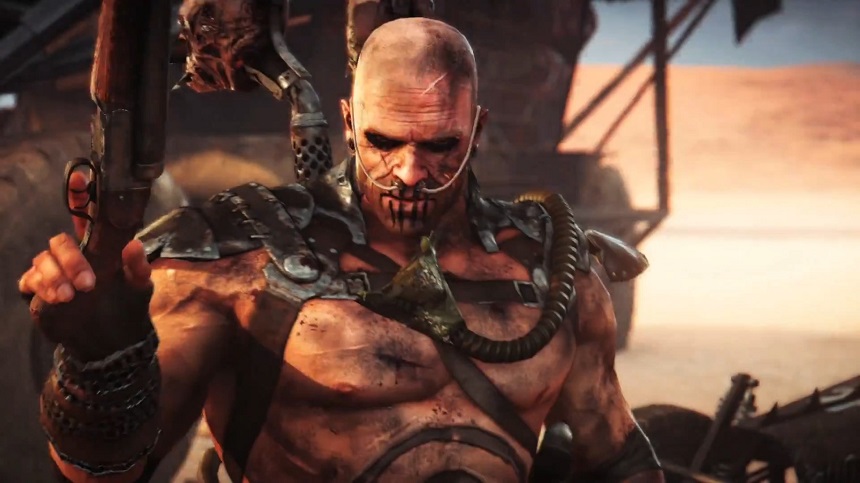 The Scrotus are the actual enemy of this game, whose goons get in your way every now and then. There are two sections viz. the Scrotus section and the Buzzards section. You have to fight with them to get scraps and get ahead of your journey.

The scrotus goons gets better and organized over the period of time, And when Max is encountered with serval of them, it gets him into fury mode. The fury mode is not just a supercool slow-mo action, it actually does more damage to the enemies with each strike, and helps you kill them faster. But fury mode is enabled only when you fight skillfully. However, he remains in this mode for a little extra time, which can be increased by exchanging tokens with Griffa.

Apart from this, you will enjoy destroying the small to big size structures called The Scarecrows, which instills fear in the heart of anyone who sees it. By destroying these structures, threat level can be reduced in the area.

Max has weapons like shotgun, sniper, harpoon etc which he can use to destroy the enemy or bring down structures. Sniper is used from the back seat of the car, and you will love the way Max coming back quickly and aiming to kill his enemy on long range. After playing games like Sniper Ghost Warrior and numerous other FPS titles, it definitely feel different in using sniper this way, but I still enjoyed it. Tools like harpoon are mounted with the car, that can be locked with the scarecrows, and when you steer your car away you can take those giant structures down. The game elements like Fiery Gates, Huge Ballons to survey and mark the enemy areas and amazing sound effects makes the overall Rowdy world experience even better.

Apart from the main story,  there are many short missions and riddles in this game which keep you quite engaged. The Death Run, is a racing competition through which you earn a lot of respect and scraps for yourself.

You also come across storms which can massively damage to our character and his car. The  visual effects are one of the best I’ve ever seen so far, that takes the intensity of the game to its peak. Storm gets extremely dark and loads of sand floating through the wind decreases the visibility at lowest possible. Added scary lightning bolts that are constantly burning the down the ground, crafts an exceptional visual experience in the wasteland.

Even after putting together a visual captivating experience, our PC with mid-budget graphics card Nvidia 750Ti O.C, managed to pull of whopping 60FPS at 1080P at ‘High’ settings, without any issues. In fact a dual core laptop with No GPU managed to get this game started and running, of course at very low frame rate, but considering the 30GB of game size, we can conclude that the graphical optimization of Mad Max Fury Road game is extraordinary.

Developers, Game Designers and Animators have paid very high attention to details, which helps building the high replay value to this game. With the given amount of customization, and opportunities, each player can makes his car unique, and enjoy the game in a very different way than others. 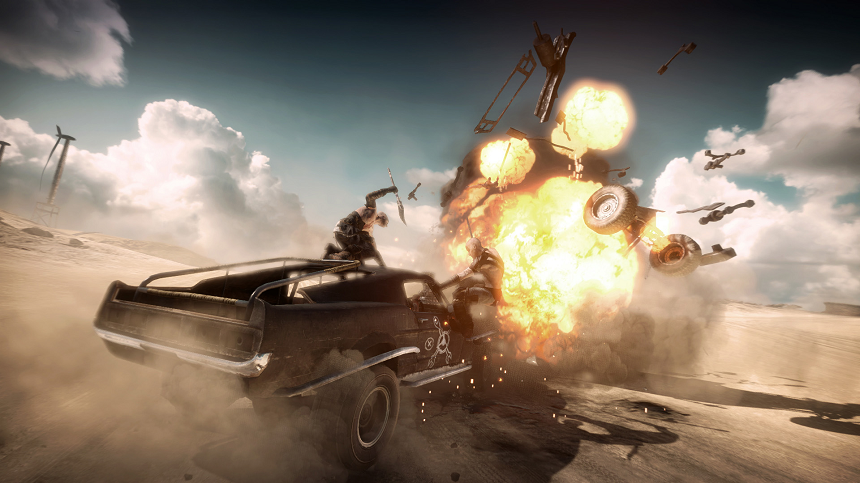 Going on a scavenging hunt for scraps and other parts to build different projects might bit too repetitive, but that’s the only way you can develop your character and his machine. Survival is the main thing in this game, but once you get familiar with the wasteland, things will start to get in your control. Destroying camps however, is very challenging given the difficulty level and you have to strategically plan your sneak in, and slowly destroy the camp rather than just go in and start using the Max’s muscle power. ( Which, BTW he is totally capable of!)

My experience in the Max’s open world was nothing short of awesome. The action in third person mode, numerous types and capabilities of the enemies, and to watch Max bursting their asses in visual pleasing Fury mode, quenches my thirst for action in every way.

If you loved Mad Max movie, this game will take this experience even further. But even if you are playing this game for the first time, the heart throbbing car combats, the survival through the hopeless world & amazing story line of Mad Max Fury Road will keep you engaged for days.

Love exploring the latest technologies and share the best of 'em from my blog articles. At DigitalConqurer.com, I research on various new technologies, test smartphones and laptops, play games and write my experiences with these technologies. Connect with me on twitter @akshaybhosaleDC
Facebook Twitter Youtube
PrevPreviousXbox Invites Fans to Beat Lotus F1 Team Driver Romain Grosjean and Head of Xbox Phil Spencer for Ultimate Bragging Rights in “Forza Motorsport 6”
NextE-xpress Kicks Off PES League – Road To Milan With Mumbai TournamentNext