Asus is releasing a slew of smartphones in its Zenfone 3 series. The latest addition to this lineup is the Asus Zenfone 3S Max (ZC521TL). It is the next variant of the Zenfone 3 Max which we reviewed recently. So, how much better is the Zenfone 3S Max compared to its predecessor? Let’s find out.

As all the Zenfone 3 series smartphones, build quality of the Zenfone 3S Max is good. Although it doesn’t have a metal body, the plastic body feels sturdy and rigid. It doesn’t feel cheap at any point. The 2.5D curved Corning Gorilla Glass dominates the front. The smartphone has the dimensions of 149.5×73.7×8.85mm. Even though it has a smaller display, it feels quite big in hands due to its big bezels on the top and bottom and also because it has a smaller width. You can see that clearly as we kept it beside the Zenfone 3 which has a 5.5-inch display. 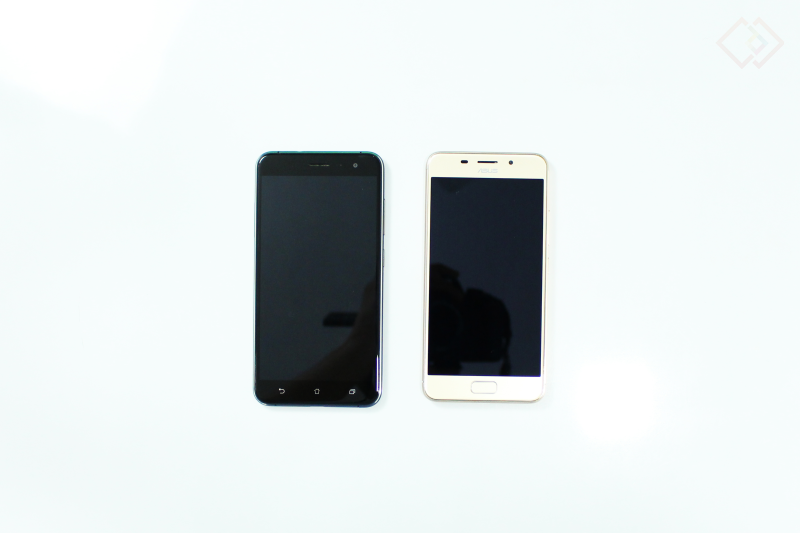 This time around there have been some key changes in the design. The first thing you notice is the big hard key on the lower front of the smartphone, the kind you get in Apple iPhone and Samsung smartphones. This key also works as a fingerprint scanner. Above the display, there is the front camera, speaker, and sensors. On the bottom, there is the micro USB charging port and speakers and also the two screws on the sides of the charging port, which we saw in the Zenfone 3 Laser.

The hybrid-sim card tray is located on the left side, and on the right are the volume rockers followed by the power button. On top, there is the 3.5mm headphone jack, and on the back, we have the rear camera and LED flash to the left and ASUS logo in the center.

Just like its predecessor Zenfone 3 Max ZC520TL, it has a 5.2-inch IPS display with a resolution of 1280×720 with the resultant PPI being 282. The pixel density is low, but the display looks good. Color saturation is good and vibrant. Viewing angles are satisfactory, but colors fade out slightly at extreme angles. 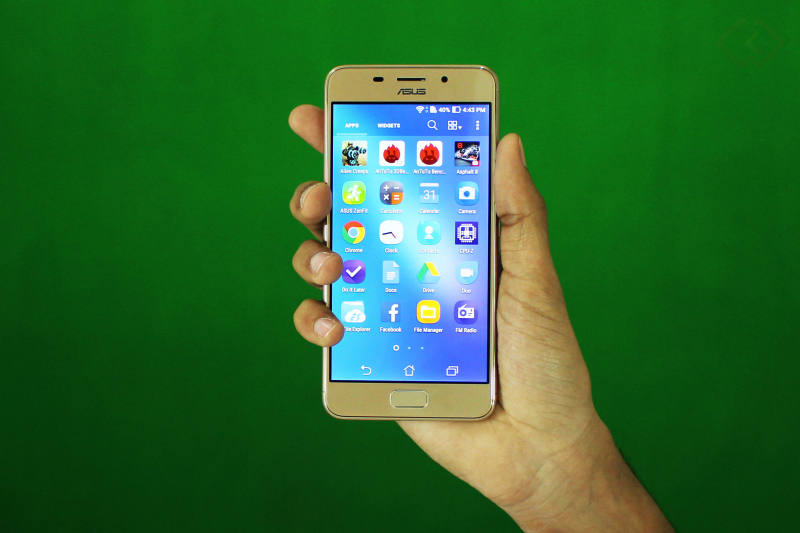 There has been a slight improvement in the specs as this Zenfone 3S Max now has a MediaTek MT6750 1.5 GHz Octa-core processor with Mali-T860 GPU and 3GB of RAM. They’ve also increased the battery size to 5000 mAh which was the prime specification of the Zenfone 2 Max.

The Zenfone 3S Max has a 13 MP rear camera with f/2.0 aperture, and a dual-tone LED flash. You can see below the pictures clicked through this camera. Image quality is decent in good light conditions. They appear sharp, and colors captured are excellent. It captures the finest details with natural colors, and the pictures are more on the warmer side.

The camera suffers a lot in low light conditions as you can see below. Pictures get noisy, and there is a lack of details. It performs slightly better when put into the Low-Light mode, but the overall performance is just satisfactory in low light mode. 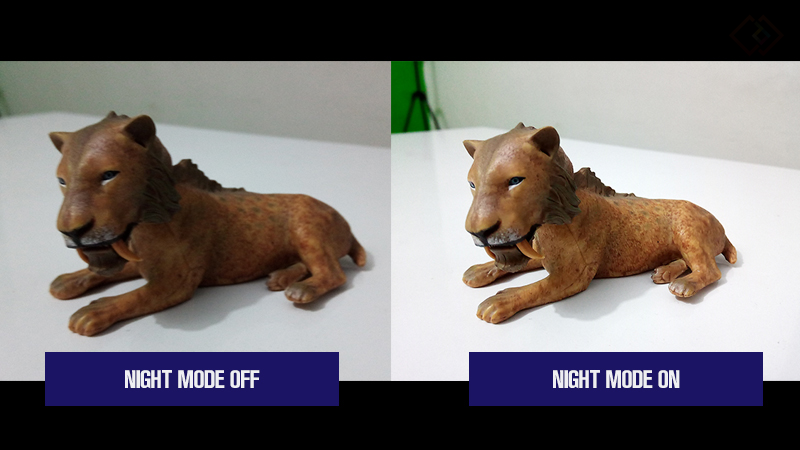 There is an 8 MP front camera with f/2.0 aperture. It is a good camera for taking selfies. The images are sharp with good color accuracy. It also suffers is low light mode but makes it up with low light mode and manual settings.

With an octa-core processor and 3GB of RAM, you expect to get a good performance and the Zenfone 3S Max doesn’t let you down. It performs seamlessly through multi-tasking, gaming and day to day work. This smartphone runs the latest Android 7.0 which makes it the first Zenfone 3 series smartphone with latest Android OS. It still has the ZenUI skin on top of it, so it’s hard to notice the changes at first, but it gets all the goodies of Android 7.0 Nougat at the core.

For instance, you can use the split screen feature. If you have 2 apps running then just hold the recent apps key just a little longer and it will put both the apps on your screen in a split manner. Then you can use both the apps simultaneously. You can even watch the video running in the split screen mode, and do the browsing at the same time. Other than that, I found it very useful, and it is times like this that I want a bigger display.

The notifications panel is now completely redesigned, starting from bigger notification tabs, and more information with each notification, you also get quick settings on top and move around the existing icons. Even the number of shortcuts in the notification tray are higher, and all these features do come in handy at many times. Android customization is at its best here thanks to new ZenUI & Android Nougat.

Coming back to Zenfone 3S Max, I played Asphalt 8 Xtreme which happens to be a game I am better at, and which is a resource hog, a right combination to test this smartphone. The game loaded quickly and ran without clutter. The smartphone did get warm after 15 min’s of play, but it wasn’t uncomfortable at any point. So great gaming performance overall.

Multi-tasking is smooth and fast. You can switch between apps without any issue. It does get a bit slower though when you have too many apps running in the background but overall, it is a decent performer.

I don’t understand what’s the purpose of this, but it did slow down my speed of unlocking the device compared to the earlier smartphones.

We ran AnTuTu and Geekbench 4 benchmarking tools and below are the results. 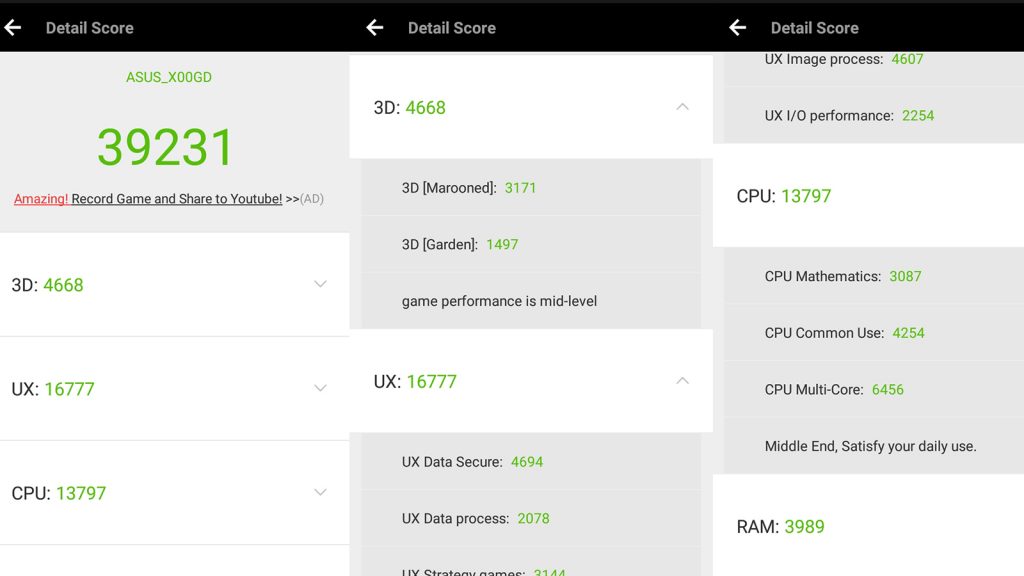 For a smartphone which is placed in this price segment, these are poor numbers. The hardware is now fully capable of handling heavy usage and day to day task, so you may not feel the difference in your average daily use. But other smartphones are priced much lower, still offer superior theoretical performance than the Zenfone 3S Max. 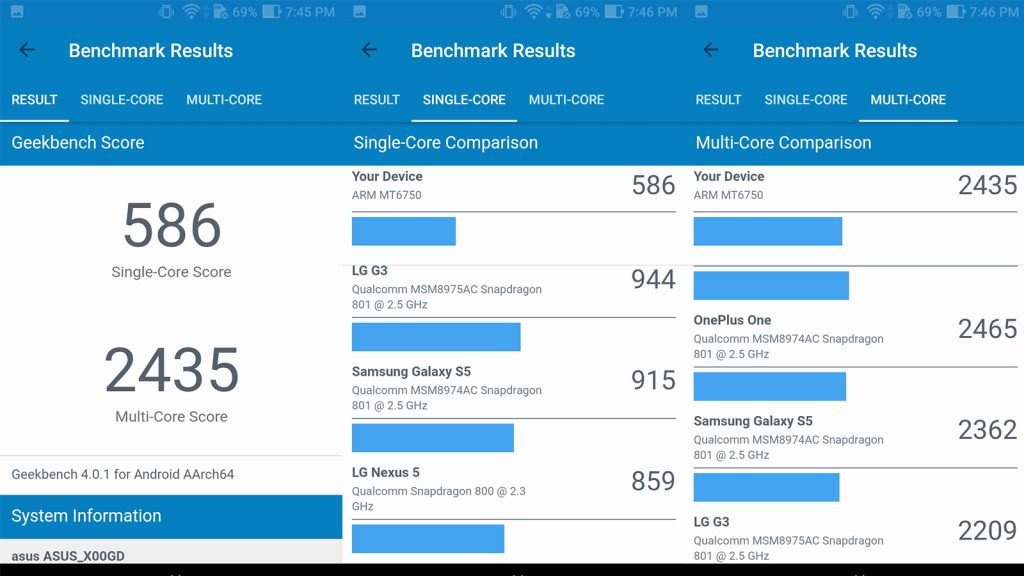 Well, this is what Asus gave their prime attention when they created the Max in the first place. All the Max smartphones in their respective Zenfone series have outperformed their competition in respect of battery life. The Zenfone 3S Max is no exception. The 5000 mAh Li-ion battery provides a remarkable battery backup.

It doesn’t support fast charging, so does take a little above 2 hours to charge completely from 0%. Once fully charged, on a regular usage, it lasted me for two days straight with a little charging left on the third day. This is without any doubt, an unbeatable battery performance for any smartphone. Though I didn’t get to test it for constant heavy usage, it should definitely run well for more than a day.

Even though it looks like there are two speakers at the bottom, the one on the right side of the charging port is the original speaker. It is loud and has a minimal distortion at higher volumes. It lacks bass punch which is okay considering this is a smartphone. Also, it can get quickly muffled when you place your finger on it. The headphones provided with the smartphone are good. They have a capsule design and provide decent noise cancellation so that music is clear and sharp as possible.

Even though this update to Zenfone 3 Max has come way too fast, it now has even better set of features and is consistent with its premium design.

With this new version, you now get the latest and the best Android 7.0 Nougat, and battery life that no other smartphone in the segment can match. Zenfone 3S Max is great smartphone I can recommend for everyday usage and gaming!

Love exploring the latest technologies and share the best of 'em from my blog articles. At DigitalConqurer.com, I research on various new technologies, test smartphones and laptops, play games and write my experiences with these technologies. Connect with me on twitter @akshaybhosaleDC
Facebook Twitter Youtube
PrevPreviousZion 8 GB DDR4 SDRAM Review
NextBest Gadgets And Innovations 2017Next