Asus has launched new smartphones in the Zenfone 3 series following up the similar name and DNA of the smartphones in the Zenfone 2 series. But this time around, Asus has launched two variants of the Zenfone 3 Max, ZC520TL which has a 5.2-inch display and the ZC553KL which has a 5.5-inch display. We received the smaller variant ZC520TL for review, and Max 2 being one of our favorite budget devices in 2016, let’s find out Max 3 is a worthy upgrade in our following review.

The Asus Zenfone 3 Max ZC520TL has a unibody design with the 2.5D curved glass at the front makes the smartphone look stunning. The front side has the camera, speaker, and sensors on the top. Moving to the right side, you get the power and volume rocker keys, on the left side you get the hybrid sim slot which can accommodate two 4G sim cards.

On the top of the smartphone you have the 3.5mm audio jack and on the bottom side there is the mic and charging port (sadly, no USB Type-C). On the back side, you get the rear camera with LED flash and a fingerprint sensor whereas on the lower side, there is the Asus logo and speaker.

Asus has consistently built some good display with 5.5-inch size, this time they decided to go with a smaller screen size, and I liked this decision. The Asus Zenfone 3 Max has a 5.2-inch IPS display with a resolution of 1280 x 720, therefore, the resultant PPI is 282. The pixel density may seem low, but the experience while watching videos or playing games was splendid. The pictures look lively thanks to the good color reproduction capabilities of the screen.

Viewing angles are quite impressive, and color saturation is up to the mark. The capacitive touch is very smooth and quick to respond.

The Asus Zenfone 3 Max has a 13 MP rear camera with f/2.2 aperture and LED flash. The images captured are crisp and capture plenty of details. The images are much better compared to the earlier iteration of Zenfone Max.

As you can see from the images below, the colors are not oversaturated and photographs look sharp and beautiful.

Images clicked in low light conditions do take a hit as there is a lot of noise in the picture. Even while using the low light mode, images just appear of average quality.

The front camera is 5 MP with f/2.0 aperture which is great for clicking selfies. The image quality is quite good in daylight and color reproduction is good and sharp. In low light conditions, they face the same problems as the rear camera but does get you decent images.

The Asus Zenfone 3 Max has a Mediatek MT6735 Quad-core 1.44 GHz processor and a Mali-T720MP2 GPU accompanied with 3 GB of RAM and 32 GB internal storage which can be increased up to 256 GB. The enormous 3 GB RAM makes it easy to run multiple apps simultaneously without any lag. The performance is very smooth and clutter free.

Voice quality is also improved, and though that still depends on the network carrier, I think Asus has done a good job in this aspect. Noise cancellation works well and even in crowded places it is easy to talk. There were no call drops noticed, and signal strength was exceptional even indoors of a building particularly in the elevator and the basement.

The fingerprint sensor is a great add-on which unlocks the smartphone quickly and registers your print even when your finger is wet or at any angle. It rarely happened when I had to try more than once for it to recognize my fingerprint, but on a regular basis, I had no issues whatsoever.

Browsing through the internet is very smooth even when I had multiple tabs open and also other apps running in the background. Same is the case with kinetic scrolling and pinch-to-zoom is fast without any trouble. All the apps load up quickly, and the overall UI experience is satisfying.

The Zenfone 3 Max handles big games like Asphalt Xtreme, Asphalt 8 with ease. The games load quite quickly and run smoothly throughout the gaming session. The display shines all over again and takes the gaming experience to the next level.

The only problem I faced with my unit was that it got heated up a lot. After playing for like 15min on the device, it got heated up to the point that I couldn’t hold it in my hands any longer. As I received the engineered test version of the Zenfone 3 Max, I hope its only limited to my particular unit. But other than that, the Zenfone 3 Max is a delight to play games on and doing daily tasks.

I did benchmark tests using AnTuTu and Geekbench 4 and below you can see the numbers obtained from those tests. 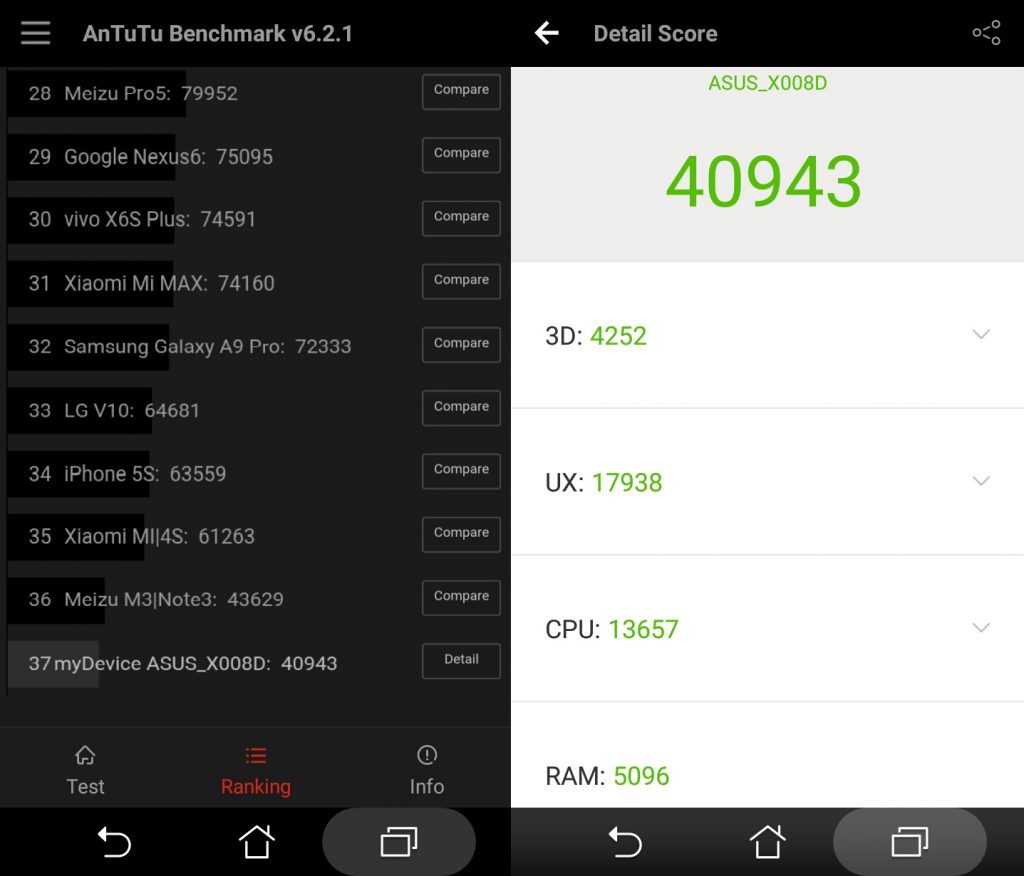 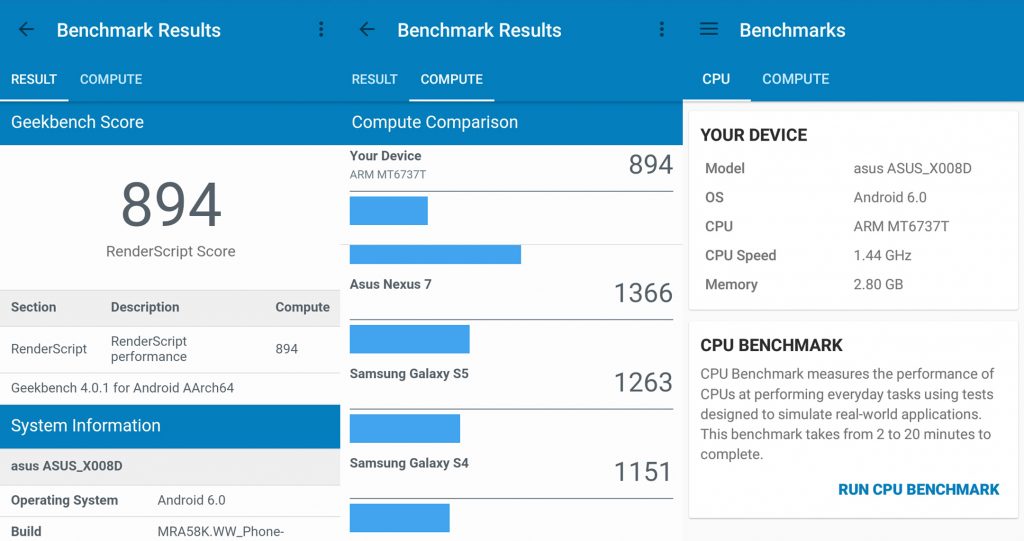 The numbers aren’t very impressive, but the smartphone performs well in real world usage. Not even once did I found this smartphone to be underpowered or lagging even with heavy multitasking. 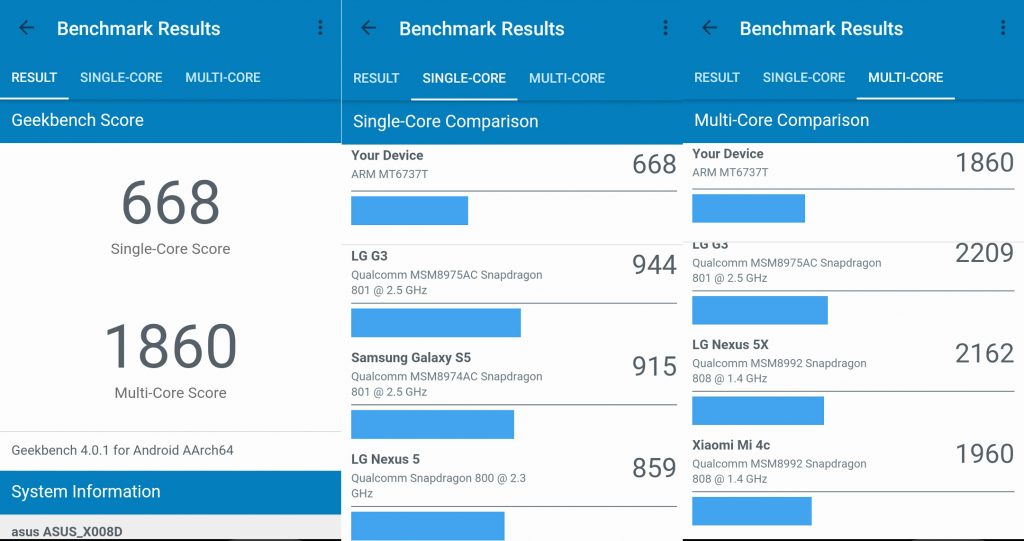 The Asus Zenfone 3 Max gets a 4100 mAh non-removable Li-Po battery, which when compared to its predecessor is a 900 mAh drop as the former Max had a 5000 mAh battery. But we found that it indeed performed much better than its predecessor.

It is a 4G dual-sim smartphone. Still, on a regular use, it will last you for a couple of days quickly and one full day with heavy usage. Even the charging time is significantly reduced as this smartphone gets charged from 0 to 100% in just around one and half hours.

The speakers are on the lower side on the back panel of the smartphone which is flat. The sound output is sufficiently loud and quality is decent. You can hear all the strings and beats clearly. Bass production is not that good though. If the smartphone is placed on a flat surface with the speaker facing downward, then the speakers get muffled So, the experience is affected.

Headphones can be connected using the 3.5mm jack and sound produced through it is exquisite.

The Asus Zenfone 3 Max ZC520TL costs around Rs 13,000, and at this budget, it is in direct competition with the Moto G plus 4th gen and the Xiaomi Note 3 both of which have the lower price tag. It even performs superior to much higher priced Samsung Galaxy J7, which we compared in detail earlier this week.

Overall, the Asus Zenfone 3 Max has a much superior design, great display & camera, latest hardware and software features, and incredible battery life, which makes it a worthy budget smartphone under Rs.15000!

Love exploring the latest technologies and share the best of 'em from my blog articles. At DigitalConqurer.com, I research on various new technologies, test smartphones and laptops, play games and write my experiences with these technologies. Connect with me on twitter @akshaybhosaleDC
Facebook Twitter Youtube
PrevPrevious10 Reasons To Choose Zenfone 3 Max
NextFour Great Laptops for College StudentsNext