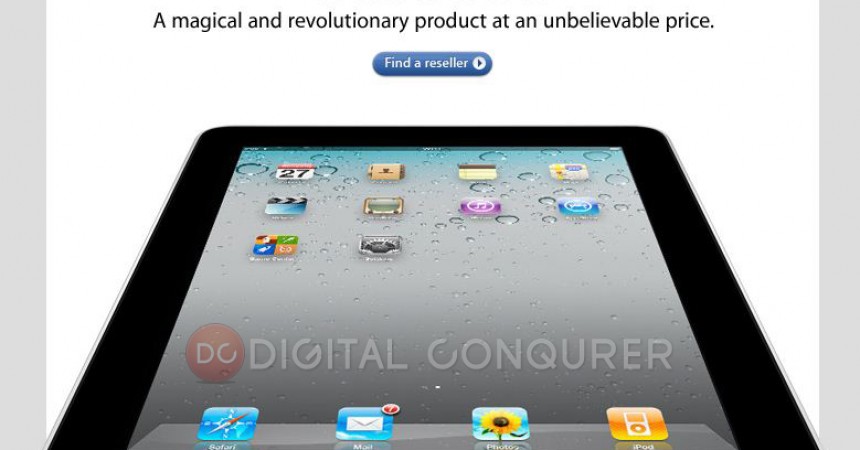 iPad after creating wave across the world since its launch, it’s finally available to Indian consumers officially. iPAd was selling in grey market & online stores as ebay.in for very high cost around Rs.33,000 for 16gb Wi Fi only model. This launch is promised iPad basic model of 16 gigs + Wi Fi is costing around Rs.27,990 & 64 gigs model+Wi Fi+3G is costing around Rs. 44,000.

When iPad was launched in US, there were very few apps with proper resolution & specially designed for iPad. This delayed launch in India – is giving consumers a ready package of iPad applications & accessories. So this launch can be very interesting to see ‘How Apple iPad changes the game in Tablet & Netbook market.’

Got to know about it after they send this big nice iPad image in my mailbox today. Interestingly, BSNL have also launched unlimited plans just 3-4 days before specially for iPad. (I think they already knew the date of iPad launching) Also BSNL is providing MicroSIM which is necessary for iPad Forum 3G Internet on it. It is really a good news that they have priced it really well in fact below 30,000 Rs., Because at this time Samsung Galaxy tab is also selling their units from past few months. Consumers in India will get good competition over Galaxy Tab as well as bigger 10″ screen with Retina display technology of Apple.

Airtel & Reliance have also already launched the MicroSIM, but their network is yet to get to the full capacity capacity as the BSNL have. So currently BSNL is having best in class 3G network all over India.

Also computing giants like HP, Samsung, Asus & Dell were already selling large volume of Netbooks in cities across India & now this iPad which is costing just 7-8,000 more, can attract more consumers to it. So Netbook market is surely gonna get some competition here.

So, It will be great to see this year- How much tablet (Specially Galaxy) & Netbook market will be captured by iPad in India.

Skype Video Calling On iPhone To Take Over Apple’s Facetime ?

iPad 2 Set To Launch In India At First Week of May ?