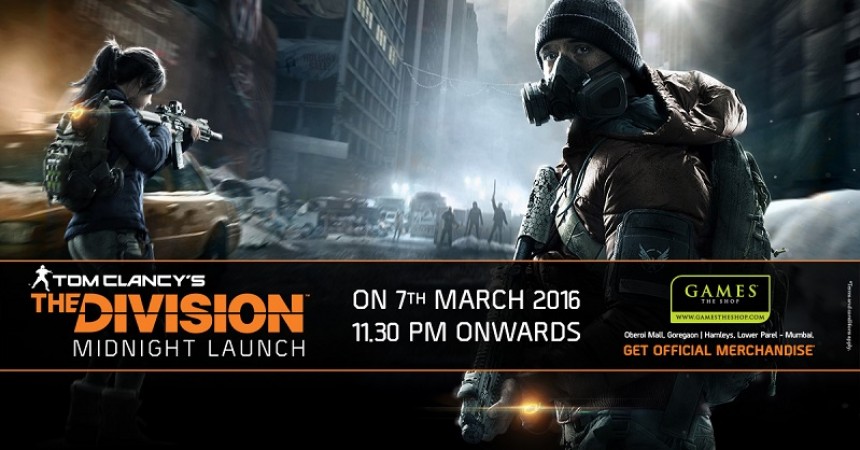 Games The Shop, the leading games specialist retailer in India announced today, the midnight launch for the most talked about game– Tom Clancy’s The Division. The Midnight launch will take place at two locations in Mumbai. It will be held on 7th March 2016 starting from 11.30 PM onwards at both the venues.

Tom Clancy’s The Division is an upcoming online open world third-person shooter role-playing video game by Ubisoft which is based on survival as a key element. Players will delve into the story that goes on as a devastating pandemic swept through New York City, and one by one, basic services fail. In only days, without food or water, Society collapses into chaos. Only then the Division, a classified unit of self-supported tactical agents, is activated. Leading seemingly ordinary lives among us, The Division agents are trained to operate independently of command, as all else fails. Fighting to prevent the fall of society, the agents will find themselves caught up in an epic conspiracy, forced to combat not only the effects of a manmade virus, but also the rising threat of those behind it. When everything collapses, your mission begins.

All the fans attending the Midnight launch will be lucky to pick up some exclusive goodies of The Division.

For more updates on games, join GamesTheShop on Facebook – Games The Shop or on Twitter page here https://twitter.com/GamesTheShop

5 Best Apps/Platforms To Save Your Hard Earned Money!

BT And Palo Alto Networks Give The Cloud A Tougher Lining