As the flash sales are going main stream, every manufacturer wants their smartphones to disappear within a few seconds. Be it Micromax’s Yu, Asus Zenfones or Xiaomi, brands are taking pride in going out of stock. So Lenovo made no mistake.

So here is our in-depth review of Lenovo K3 Note, which was an expected success in flash sales, but lets find out how it performs in our tests.

When I unboxed the smartphone, I anticipated the big with 5.5-inch K3 Note of being heavy, but it was extremely light when I picked it up. It weighs about just 130 grams, we found it has a poor built quality.  It has a lightweight plastic back cover that can be easily bent or broken with the single blow.

The design on the other hand is quite good, and Lenovo K3 Note feels sturdy in hand. Being a big display, don’t expect it to operate single-handedly for longer times. The IPS display on this Android smartphone produces very vivid colors, but lacks corning gorilla glass, which is disappointing. Being a dual-SIM supported smartphone, Lenovo K3 Note is capable of running on 4G networks with the Micro-SIM slots.

This phone is a beast when it comes to performance. It feels super fast, even faster than the Snapdragon powered [tooltip text=”In-depth review of Xiaomi Mi 4i” url=”https://digitalconqurer.com/xiaomi-mi-4i-review-hands-on”]Xiaomi Mi 4i[/tooltip]. With the benchmarks alone, it single-handedly beat the phones price above Rs.30,000 price tag in performance, quite literally. Heavy game like Asphalt 8 was loaded super-quick and performance was outright amazing.

Browsing experience was equally good, with the quick page loading and responsive performance in gestures like  pinch to zoom or kinetic scrolling. Sharp text rendering makes reading or browsing a pleasant experience even for long times.

Just like the Browsing, the Google maps worked really great for pinch to zoom, and quick loading.

The benchmark readings are displayed below which fairly gives you the idea of how fast this phone is.

Antutu Benchmark showed the real horsepower this phone is built with.  Scoring over 46,120 that is considerably higher than OnePlus One and just less than Asus Zenfone 2 & Galaxy Note 4. 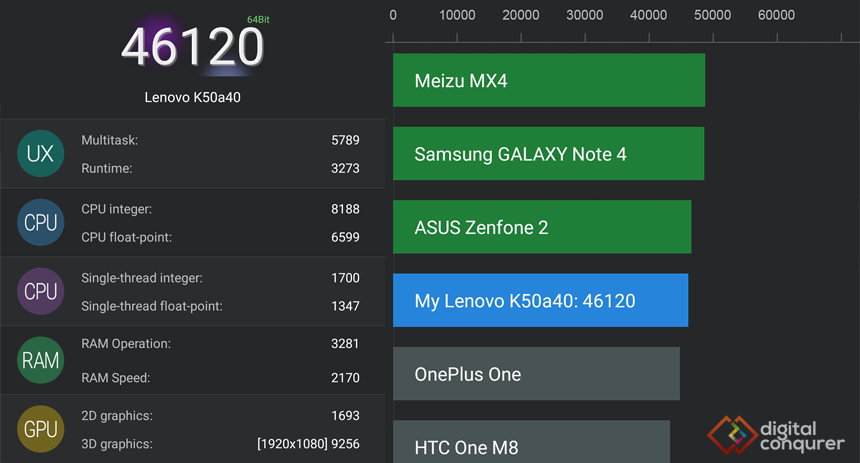 Geekbench score was 812 for Single-core performance and 3909 for multi-core, which as you can see is lot better than recently release Mi 4i, which is lot expensive than K3 Note. Geekbench proves this device’s performance to be higher than last year’s flagship Samsung Galaxy S5. 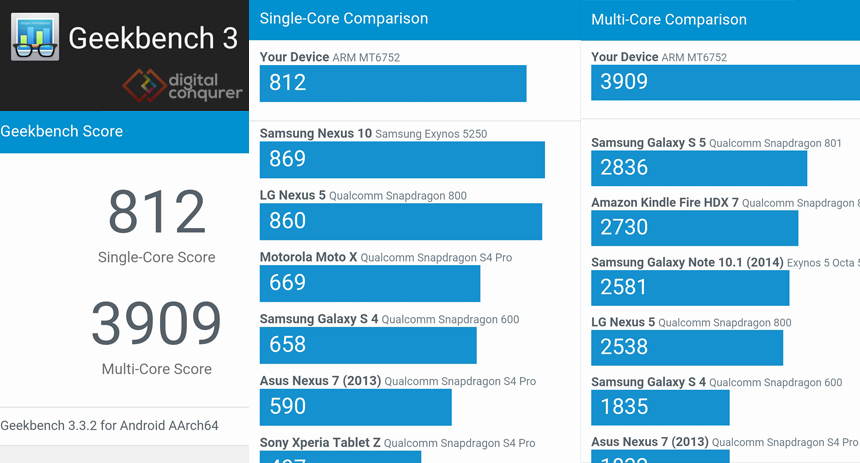 The display produces beautiful colors, and overall pale shade on the display feels good to eyes. The default color temperature might or might not be as good for everyone, based on what you have used previously, but you can easily tweak these settings under the advanced display manipulation settings.

Watching full HD movies was a delightful experience, and images are great to view from all viewing angles. With the very responsive touch functionality, this screen produces eminently detailed images with its 1080P resolution.

This segment was the outright disappointment with what was promised on the paper, as the K3 Note’s camera quality was not up to the mark for 13 MP Shooter. It felt somewhat around low-end 8 MP or even 5 MP at times. Being a budget device, it comes with the low-end camera sensor, and you will see bad results, when you try to capture a picture in speed or photos in low light.

Check out the following images –

Front camera is nor for selfie-freaks, as it captures soft images, and gives you an un-necessary make-up effect. Camera has many good feature’s other than face and smile detection like blink detection and two-finger gesture (depicting victory) detection using which you can click an image by just blinking at the phone or making the gesture.

But sadly due to the poor camera performance, these features are a big waste.

Lenovo K3 Note comes with a Dolby Digital Sound System, which can be turned on and off. But you will love the lound but controlled sounds that K3 Note produces, while watching movies or listening to songs. The lack of headphones is no disappointment knowing the external speakers produces absolutely no noise or distortion even on the highest volume.

There are a lot of bloat-ware apps on this phone, but Lenovo does give you the option of uninstalling these apps (But well, you can’t delete all of them after all!).

Battery lasted pretty much throughout the day, even after being consistently on the office Wi-Fi, hour-long gaming sessions, some benchmarks and casual browsing and downloading. So impressive battery life for a 3000 mAH smartphone that powers a big 5.5-inch display.

The Leovo K3 Note is priced at Rs. 9,999 on Flipkart, and goes on the flash sale every week.

With all things considered, Lenovo K3 Note performs best under the price tag of Rs. 10,000. If you can ignore a camera that captures shady selfies, and the poorly built back-cover, this phone is a great deal at the price.

I would easily recommend this phone for gamers & budget buyers for amazing set of specifications at whopping low prices.

Love exploring the latest technologies and share the best of 'em from my blog articles. At DigitalConqurer.com, I research on various new technologies, test smartphones and laptops, play games and write my experiences with these technologies. Connect with me on twitter @akshaybhosaleDC
Facebook Twitter Youtube
PrevPreviousXiaomi Mi 4i Hands-on Review: A Smartphone With Brilliant Display And Decent Performance
NextGadgets That Will Make You Go ‘ Shut Up And Take My Money’Next