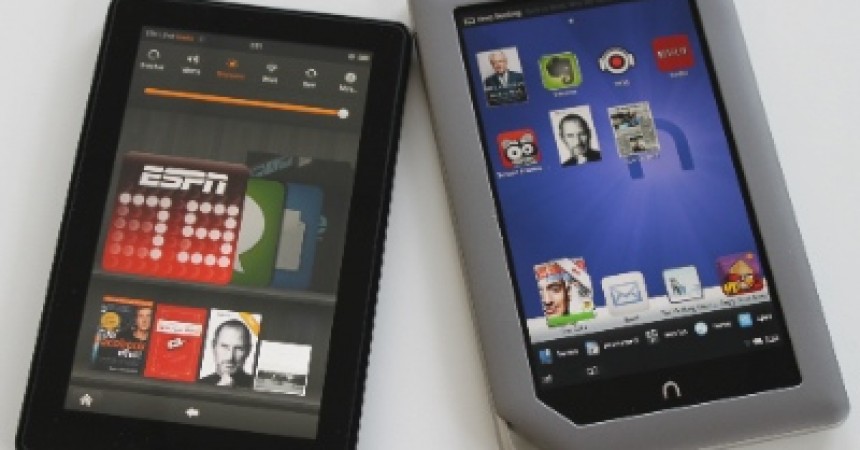 According to the Asian reports, there is sudden boost in the demand for the 7 inches B&N Nook Tablets and Kindle Fire in the market compared to the traditional 9.7 inches display.

The shipment of the 7 inches display devices grew up to seventeen percent in the November which has surpassed the shipment of 9.7 inches devices. (These figures were given by the Taipei-based Digitimes)

The e-commerce giant, Amazon already had said this month that, the sales of the kindle fire has been increased and it is becoming the best-selling product in the panel. Speculation is there that sales will cross the milestone of several millions this month. On the other hand, it is expected that Barnes & Noble will be delivering a million of Nook Tablet and Nook colors in this 4th quarter.

Apart from this, the demand of 9.7 inches devices is also low due to Apple. Silence was there on the purchase of display for the up coming iPad.  Although there is a strong demands from the Apple as they are getting ready to capture the tablet market with their new iPad, according to reliable sources. The new iPad is speculated to hit the market in March- June next year.

So what would you prefer considering budget as well as performance – 10 inch tablet like iPad 2 or 7 inch one like Kindle Fire ?

How To Access Your Music Library From Kindle Fire [Tutorial]

How to Root Your Nook Tablet To Access Android Market?

How To Access Your Music Library From Kindle Fire [Tutorial]