Asus made a relatively late entry in the smartphone segment, and its success only came after its Zenfone series launch that offered numerous variants of smartphones at affordable costs. This aggressive pricing vs specs ration got even better with Zenfone 2 series, which got the addition of Zenfone Laser, Zenfone Delux and Zenfone Selfie. Today, I am going to review Zenfone Laser which received record pre-orders, by offering latest specifications in the tighter budget.

This smartphone was scheduled to be released on 19 September, but due to record pre-orders, Asus started shipping the device a week early, which was a nice surprise for those who booked it.

The Asus Zenfone 2 Laser comes in two variants, one has a small 5-inch display ( ZE500KL) while the other sports a 5.5-inch display (ZE550KL). There are also 8GB and 16GB variants that has price difference of Rs. 200, and the 3GB RAM version yet unavailable anywhere in India, which is expected to be priced at Rs. 14000.

The one we have, has a big 5.5-inch display, the power button is on the top and volume rockers on the back similar to earlier Asus Zenfone smartphones, so no surprise there. It has snapdragon 410 SoC with 1.2 GHz quad-core processor and 2GB RAM. It comes with the 13MP PixelMaster rear camera with dual-LED flash and laser auto-focus and a 5MP front camera. It comes with 16GB internal storage and a massive 3000 mAh battery.

Build quality is very good considering the budget price tag. It has a removable back cover which allows you to insert your sim cards and micro-sd card and battery is removable as well. The micro-SD card slot is located just over the SIM 1 slot, which is unusual. The rubberized plastic back cover is sturdy, and gives a great feeling when you hold the device in hand.

The shiny metal plates on top and bottom gives Zenfone Laser a premium feel, which is rare in smartphones at this budget.

It’s big 5.5-inch IPS display is ideal for watching videos or playing games and it has the best viewing angle’s we’ve seen so far comparable to high-end devices. Hold this phone at any angle you like and still you’ll see the exact same colors which you see normally on this display. I personally prefer using Android phones with stock user interface, so my first encounter with ZenUI made me feel it being overcrowded, especially in the notification bar.

Though there are lot of useful quick buttons like Boost RAM, One-hand use, Glow touch which are built-in with the UI, and are not available with stock Android. Another app named Auto Start will help you close or disable the apps that makes the device start up slower, just like in our PC.

If you do not like the way ZenUI looks, you can simply chose from numerous themes available.

We had no problems running slightly heavy games on this device, and playing graphically intensive titles like Gun Bros or Tiny Troopers was an enjoyable experience . The frame rates were consistent over the longer gaming sessions, and moderate heat was generated for over 30 minutes of usage. So great gaming performance for a budget device.

Thanks to bigger display, browsing and general reading experience on Zenfone is far better than smaller devices. The webpages renders quick, and options like kinetic scrolling or pinch-to-zoom works smooth.

Pixel density of Laser’s display is 268 ppi, yet the the color reproduction on screen is quite impressive.

For a mixed use of about a day,we noticed no heating issues in general. Similarly this device easily lasted for the day when subjected to mixed use of network calls, data connection, watching casual YouTube videos and browsing on Wi Fi. 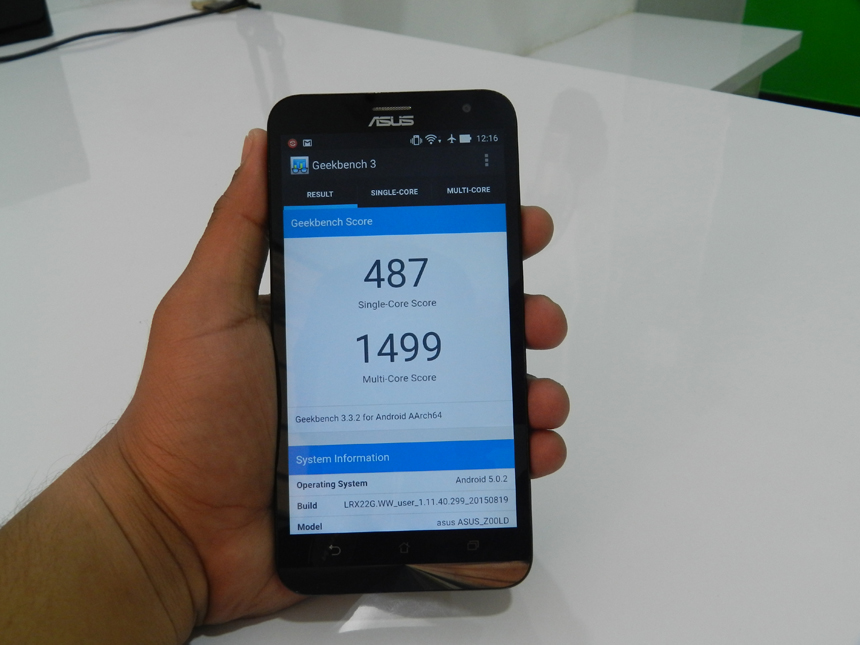 Speakers are located at the lower backside of the phone on the curve, so they don’t get muted when you place the phone on the desk. It is quite loud and quality is real good. Music and videos sounds good both on Headphones or with the built-in speakers.

The dual mic on top and bottom helps communicate with clear and sharp voice over the network calls. The built-in speaker outputs high quality audio, making it easier to communicate even in noisy location.

After being touted as a phone with great camera, I was particularly excited to test its features. Unfortunately, the results were not as per the mark. Despite the 13 MP, laser auto-focus camera the quality of images captured outside in full daylight was just about decent, and not up to the mark. Manual focus works good, and front camera does okay job. Not to mention that this Zen special camera comes with the numerous options you can play with, if you love going technical with photos. You can record up to 1080P full HD video with this budget smartphone, that produces good quality videos.

Low light photos were average with both cameras, and If you are planning to buy a smartphone, with great camera, you should go for Lumia 730 by paying Rs. 2500 extra.

So, the Asus Zenfone 2 Laser, at about Rs. 9,999 did impress us a lot with its build quality, display and performance. The only thing that could’ve been better is camera, but considering its price, this is most value for money smartphone under Rs. 10,000.

Love exploring the latest technologies and share the best of 'em from my blog articles. At DigitalConqurer.com, I research on various new technologies, test smartphones and laptops, play games and write my experiences with these technologies. Connect with me on twitter @akshaybhosaleDC
Facebook Twitter Youtube
PrevPreviousIndia Gadget Expo 2015 All Set To Enthrall Customers
NextASUS Announces Partnership with OculusNext