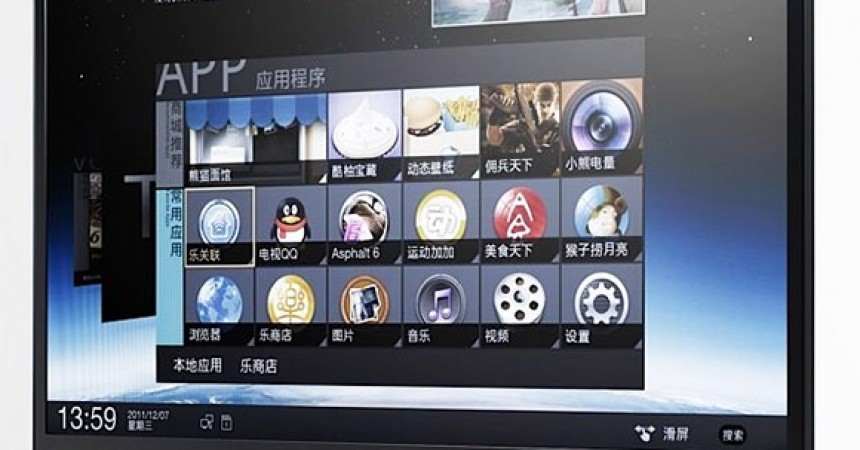 The thinkpad thinkers are now ready to wrap off the Television market with their new innovation where the users will get the opportunity to see the power of Lenovo and capabilities of Google Android ICS. Lenovo is trying to mark the recognition in the world of TV market with capabilities of Android Ice Cream Sandwich. Best known for their laptop series, the company is now ready to rock in the TV world with the first television to be run on Google Android 4.0. The device is the dubbed of Lenovo K91Smart TV and will initially be available only in China and the further release will be dated after few months.

This 55 inches 3D LED will be powered by Qualcomm 8060 Snap Dragon dual core processor and is supported by 1 GB RAM. There is 8 GB of internal storage and also the provision for the SD card.

The TV will be operated by the voice commands and there is also a 5 MP camera for the video interaction and for locking the TV with the face recognition security feature.

The owner of the TV will also get the cloud support; this will allow the user to share the media among their TV, Smart phone and Tablet. Along with this, the user will also be able to operate TV with their tablet and smart phone.

Looks like Lenovo has planned the inception to invade the market dramatically, and I would rather heartily welcome this new generation of smartphone OS powered televisions, But will you consider buying one of these ?

Do let me know in comments section below.

Samsung Galaxy S Plus I9001 Review : Another Smart Android Device !

Lenovo K900 Entered In Indian Market; Will Compete With Note 3!