In our Eufy RoboVac 11S review, we’re discussing a relatively ordinary robot vacuum in a world of far more intelligent and powerful robots since it lacks good edging performance and comprehensive spot cleaning. Mainly, this model seems to be lacking a lot of practical functions. No app, no virtual limits can be set, and no accessory life tracking, history report, repeat features, cleaning map, etc. Finally, since this robot doesn’t have a dust-removal system, you will probably have to service it more frequently than the other RoboVacs. If you plan to purchase a robot vacuum, we suggest reading our best robot vacuum reviews to compare them to others.

In 2023, to get an excellent robot vacuum you don’t need to spend a lot. The Eufy RoboVac 11s is an upgrade of the RoboVac 11, one of our favorite inexpensive versions, and it offers powerful, effective cleaning capabilities in a smaller package for the same $219.99 price. The RoboVac 11s is one of the quietest vacuums we’ve tested, and it’s small enough to clean beneath almost anything in your house even though it lacks modern capabilities like a smartphone or voice control.

It’s a good choice if you have paper-thin walls or low-clearance furniture, but the Ecovacs Deebot N79S is still our Editors’ Choice because it comes with phone control and Amazon Alexa compatibility for only $10 more.

The RoboVac 11s resembles the RoboVac 11 or Eufy vaccum cleaner quite a bit. Because to the darker hue of its round body, it is significantly harder to see the Eufy emblem at the bottom. In comparison to the original, which had a 13.0-inch diameter and a 3.0-inch height, it is also smaller, measuring 12.8 inches in diameter and 2.8 inches in height. As the shortest robot vacuum we’ve tested, the Eufy RoboVac 11s is ideal for cleaning under low coffee tables, couches, and media consoles. 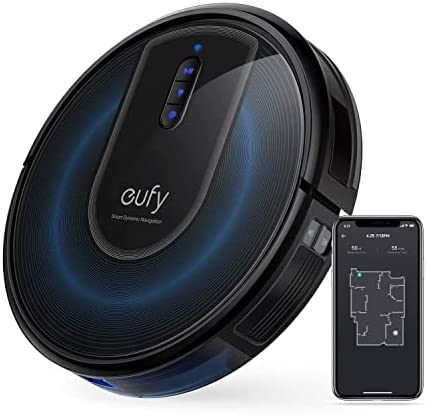 The oval power button on top of the vacuum also functions as an indicator light. When charging, it flashes orange. When the battery is full, it flashes blue. If there is a problem, it flashes red. The bumper, which also houses the vacuum’s infrared sensors, is located on the vacuum’s front edge. The fairly large 0.6L dustbin is on the other end, and the bottom of it contains a helpful error troubleshooting chart. Two spin brushes, a nose wheel, two main treads, a rolling brush, charging contacts, and drop sensors are all located below.

The included remote has a monochrome display on top and is oblong in design. The current cleaning mode is indicated on the screen’s left side, while the right side is separated into three sections. The top displays the time, the middle shows the level of suction, and the bottom displays the time when your cleaning program is scheduled. The buttons below are each identified by an icon, and a key on the other side gives a more thorough explanation of what each one does. Unfortunately, unlike many other robots, the 11s cannot be programmed with specific timetables.

If you set a time, it will clean at that time; for instance, you can’t have it cleaned on Monday and Wednesday and another time on Tuesday and Friday.

Results of our analysis and Testing

The Eufy RoboVac 11S Slim came in last place, displaying overall performance that was below average and lacking in any distinguishable features or functions. Despite being affordable, it lacks convenience features and intelligent navigation, and even though it isn’t pricey, there are many more worthwhile options. Visit our post on the top robot vacuums to discover how it performed in comparison to its competition.

We bought all the most promising and highly rated robots Eufy vacuum cleaner and evaluated and assessed their performance in a set of head-to-head tasks to calculate the scores for each robot and to choose which ones deserve an award. The Eufy results are displayed below, broken down into six rating metrics and weighted according to their overall importance.

You may want to read: Shark vs Roomba – Comparison of the Best RoboVacs

To pass this set of tests, a robot must be able to move around the various pieces of furniture and other obstacles that are normally seen in homes without becoming stuck. It must also be able to quickly and effectively return to its charging base when instructed. Each of these contributes 30% to the final score. This model performed terribly in our equipped room. During testing, Eufy vacuum cleaner regularly became stuck and bounced off of furniture before stumbling to escape. We don’t advise people with pups in training to use this model because it also lacks poo-avoidance capabilities. This robot was having trouble finding its docking station. It didn’t drive home in a methodical way; instead, it bounced around wildly until turning towards its base. The amount of your home that each robot can clean, as well as its capacity to clean numerous rooms, spot clean, and whether or not the software includes no-go zones where you don’t want the robot to clean, were all factors considered for this statistic, which made up 40% of the final score. The Eufy vacuum cleaner produced a disappointing set of outcomes. In our tests in furnished rooms, this vacuum frequently became stuck, overcleaning some regions and completely ignoring others as a result of its irregular navigation. It lacks a barrier system, thus you will need to build one physically to separate areas. Unfortunately, this Eufy vacuum cleaner only actually cleans one room at a time, and if the battery dies, it does not immediately go back to the house and recharge. You can try having it clean various rooms, but because of its semi-random behavior, the more space you ask it to clean, the worse its intermittent home coverage will be. Finally, as demonstrated in our edging test, the Eufy does an excellent job of thoroughly cleaning against edges, leaving only a thin residue of coffee grinds behind.

For our carpet cleaning metrics, we evaluated each robot vacuum’s capacity to remove a variety of common household problems. 15% of the final score comes from this measure. While performing better than average on both low-pile carpets and fluffier, higher-pile carpets, the Eufy vacuum cleaner did a respectable job of cleaning rice. In both situations, it only left a few grains behind. Oatmeal was a bit of a challenge, leaving behind a significant amount on the flat carpet test and even more on the fluffy carpet.

Under the sofa, the Eufy is making its return.

For our final two tests, we used mini-wheats and flour to determine how well the Eufy can manage both large and small detritus. It struggled in tests on carpets with low and high piles, failing to pick up cereal and making a mess worse by slightly grinding the cereal. Additionally, it failed to remove wheat from our carpet and lacked the strength to ever complete that task.

In our Hard Surface Cleaning metric, the Eufy RoboVac 11+ performed exactly the same as before. These tests, which account for 15% of the final score, were conducted on a strip of hardwood laminate flooring. There was very little residue left behind by the Eufy, largely in the form of dust that had accumulated into gaps. It cleaned rice and oats admirably.

When given flour, it mostly pushed it around instead of gathering any of it. Simply put, it lacks the strength to remove flour from the depths of the spaces between the boards. In the end, it was unable to harvest any mini-wheats since it lacked the clearance to drive over them; instead, it merely plowed through them.

Our pet hair statistic accounts for 45% of the final score, and the Eufy RoboVac performed about average in this category. The Eufy picked up roughly 40% of the pet hair used in the test, which we spread out over a test carpet.

In our final metric, which accounts for the remaining 20% of the overall score, The Eufy likewise performed poorly. Most of the features and capabilities that improve its usefulness and convenience and are now considered standard among its competitors are absent from it. This robot lacks an app, a virtual barrier-setting feature, accessory life tracking, history reporting, repeat features, and a cleaning map. It is solely equipped with a portable remote. The Eufy vacuum cleaner lacks a dust removal system, so it will need to be emptied of its onboard dust collection box considerably more frequently than other, more capable and practical models. Suction strength remained the differentiator when it comes to selecting the RoboVacs, but this one is by far the strongest I’ve ever owned. Due to the fact that it has two turbines, it can move a larger volume of air at any same time. Thankfully, if you are just using it on a hardwood floor, you will be content with the middle level and never need to go all the way up. It is quite noisy when it is operating at full power.

A good detail that will lessen the number of scratches that eventually show up is the simulated fiber texture that surrounds the bumper and its corners. Overall, a really high-quality and well-designed product. The $220 Eufy RoboVac 11s is a fantastic option if you don’t require phone or voice control. For anyone with a lot of low-profile furniture, its tiny form factor, strong suction, silent operation, and long battery life make it a no-brainer. The Ecovacs Deebot N79S is a somewhat better option for everyone else, though. Our Editors’ Choice for inexpensive robot vacuums, it offers app control, improved scheduling choices, and connectivity with Amazon Alexa for just $10 more.