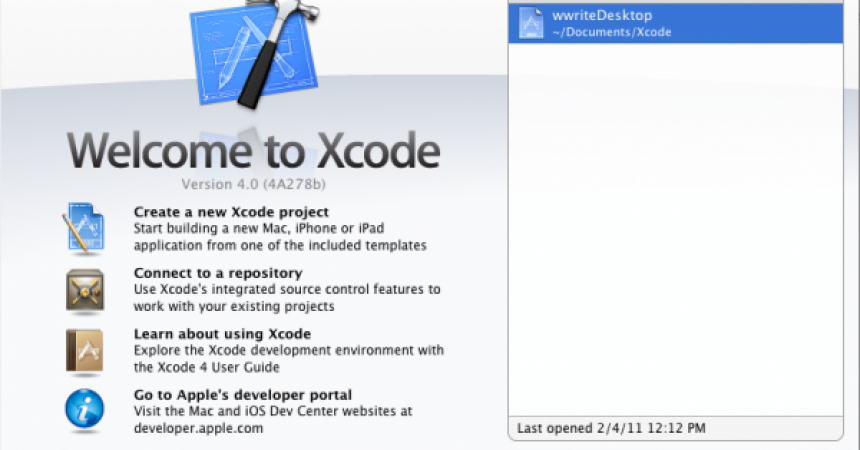 The XCode was first introduced in 2003 and several upgraded versions have come in since then, each offering better and more convenient features. The XCode has three basic components – the XCode itself, the interface builder and the organizer. The XCode does the actual coding for the application, while the interface builder creates appropriate interfaces for the operating systems – the Mac OS X or the iOS.  The organizer supports organizing functions on the apps such as archiving the codes and conducting performance tests.

The previous XCode versions upto XCode 3.0 had no consolidation between the various components. While developing apps, you need to work in sync with the interface builder and the coding that is done. Because they were separate applications, it caused the opening of several windows to manage each task. The desktop tended to look cluttered causing confusion, reducing the efficiency and productivity of work. The XCode 4 addresses most of these issues effectively. The advantage of the XCode 4 over earlier versions is that it combines the essential  three components into one single interface and is a major step towards consolidation. Instead of individual windows for each function, the XCode 4 offers tabs, which can be customized to individual tasks such as UI design, coding, testing and debugging. This makes switching between the various tasks easier. It also reduces the windows clutter on the desktop. The XCode 4  integrates the interface builder’s GUI editing features into the XCode proper. So it becomes much easier to work on various GUI features that you wish to incorporate in your apps.

The XCode 4 requires an Intel based Mac running on Mac OS X 10.6 or later version. It does not support developing applications for power PC, which was supported by the earlier XCode versions.

Apple has now allowed free download of the XCode 4 from the Mac App store. What are you waiting for? Download the XCode 4 today and enrich your application development experience in numerous ways.

iOS 4 – A Mixture of New Technologies Introduced With It

The Most Useful Mobile Apps, Which You Should Load Right Now

5 Best Apps For This Festive Season