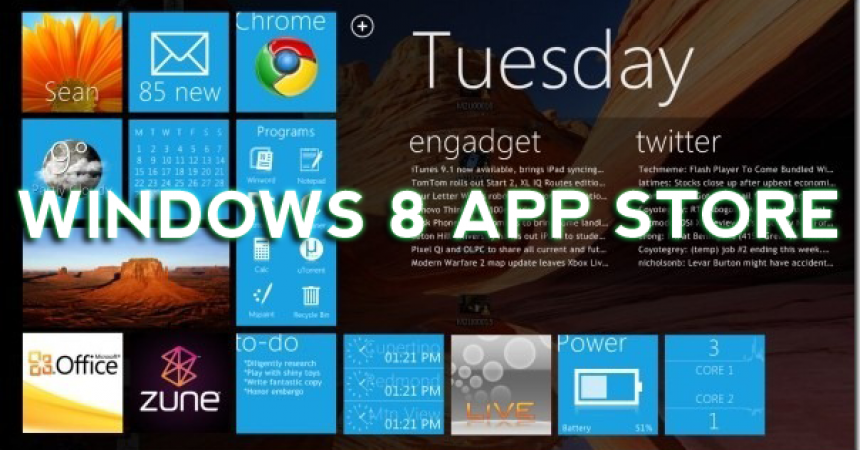 There is hot News from San Francisco that Microsoft is talking about the Windows stores just like its competitor Apple have. Windows is looking forward to establish similar kind of market place for the Metro style Windows 8 Applications, just like Apple had for the iTunes and Mac Apps. Apple is already into selling both computers and tablet applications through Apple’s Mac App Store. Microsoft is also keen to highlight the difference, what best they can offer compared to Apple. Microsoft is promising to make the Windows App Store much more transparent, flexible and lucrative for developers and for users. The Windows App store will support paid as well as free applications, with paid Apps ranging from USD 1.49 to USD 999. Developers can initially offer free trails and there will also be support to convert the trails ones into full version. Microsoft will make use of its own advertising and purchase infrastructure, but this will be optional; developers willing to use different ad network would also be welcomed.

With Apples infrastructure, the biggest issue faced by the developers is of transparency. Many times it is surprising for the developers to have application rejected without any detail about the issues with the app. Approval process in the Apple is not open to developers and they struggled to gain insight, at what stage their app for rejected. Compared to this approach, Windows is looking forward to bring better standard validation process which will enable the developer to know the status of their App submission and also to track their App in various validation phases.

In terms of money matter, Windows Store will follow the similar path as of Apples and will keep 30 percent cut of the application sales, once the application reaches to the milestone of USD 25,000, the cut will drop down to 20 percent. For competent developers, this is the better deal than what Apple offers. Terms are also better when you have your own subscription system, Microsoft will only liable to take cut when you use the Microsoft system. The registration charges for individual developer will be USD 49, where as company registration would cost USD 99!

Right now there are no users at the moment for Windows 8 but company is looking forward to know the market condition. With the 1.25 billion PC and more than 500 million Windows 7 licenses compared to 247 million Android, around 152 million iOS and 30 million Mac, Windows is interested to know; should Windows 8 will see the same success as of Window 7 and will it become the desirable platform for user community.

Windows is right now available in 231 international markets in 100 languages with purchase in 58 currencies. Payment to the developers will be made in one of the thirty-one currencies. Microsoft is also preparing to make use of other products to market Windows 8. IE 10 will be incorporated in Windows 10 with special button to enable the developers to link directly to their App in the store.

Microsoft has also described about the enterprises store features. The access to the store be restricted or can be removed by the Administrator and enterprises can deploy their own Metro style Apps without passing through the Windows store.

Microsoft also has announced that the store will be launched concurrently with the release of Windows 8 beta, which is currently to hit the market in late Feb. There will be preview release, a single beta and single release for Windows 8.

Experience The Charisma Of Microsoft Office 2013 ProPlus For Free