Antivirus Giant Symantec’s one of the promising product Norton 360  Version 6 Beta was released yesterday in India. Just to let you know is an award-winning all-in-one security suite by Symantec & the all new beta is available for free download from the Norton beta website.

Norton 360 comes with the  the powerful core security technology found in Norton Internet Security 2012 &  additionally  enhances the PC tune-up and backup capabilities.  It  is designed to deliver the strongest, most comprehensive protection for consumers, without sacrificing speed or performance. 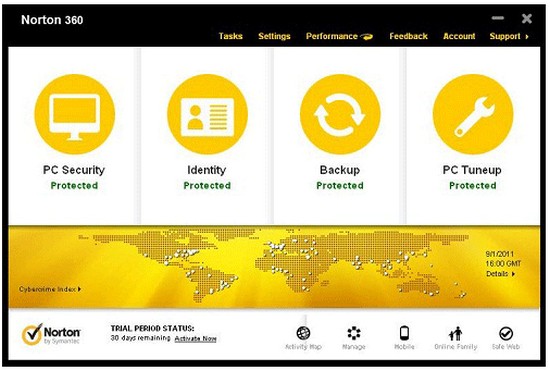 New protection and usability improvements in the Norton 360 version 6.0 beta are as follows:

Norton Management – New web-based functionality lets users manage their Norton products from anywhere in the world. Users can remotely add Norton products, manage security settings and update subscriptions, making it simple to check on the health of their devices or fix issues without needing to be there in person.

Download Insight Stability Ratings – Checks every downloaded file for safety before installation and now provides users with additional data about the predicted stability of the application in their environment based on the stability experiences of millions of other Symantec users.

In addition, key continuing features include:

The Norton 360 version 6.0 beta is available for free public download now at the Norton Beta Center.  Beta testers are encouraged to share feedback and discuss their product experiences in our online Norton Public Beta Forum.

Tech and gaming blogger since 2009. I spend my day exploring what's new tech and its impact on our day-to-day lives. From smartphones to electric cars, AI to EdTech, Business Tech to Gaming Hardware and beyond ... I write news, guides, and reviews on Digital Conqueror.
Facebook Twitter Youtube
PrevPreviousThe New Kindle Lineup: Which Is Best for You?
NextWorld’s Cheapest Aakash Tablet Now Available For Pre-OrderNext