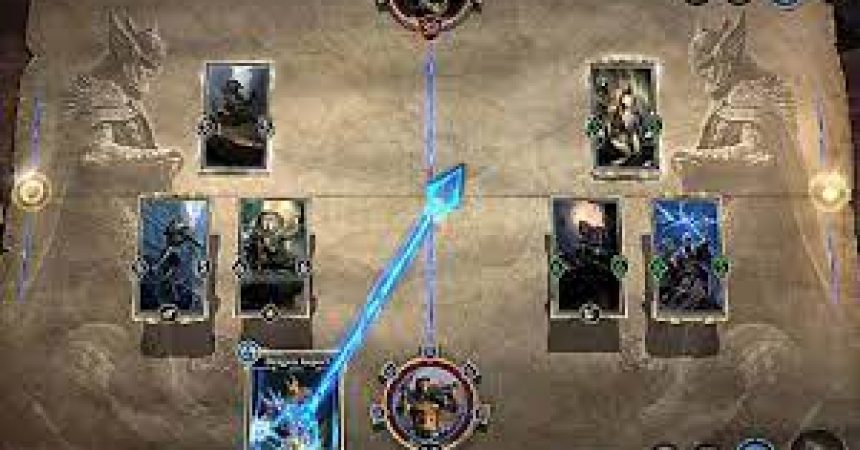 How Does Elder Scrolls Legends Rank Among Strategic Card Games?

Unlike TCGs (Trading Card Games) the CCG (Computer Card Game) space gives players the option of playing completely digitally, without the fear of losing or damaging any physical cards. It is in this rather crowded space that the Elder Scrolls Legends (ESL) released in 2017 and has since continued to grow in its player base and appeal. While the game incorporates many aspects of strategic card gameplay found in other series such as Hearthstone, Magic the Gathering and even Yu-Gi-Oh! ESL is unique in that it still finds a way to be relevant inside the broader universe of the Elder Scrolls RPG games. In this article we will look at all the ways that this game appeals to a wider audience while satisfying the Elder Scrolls RPG niche at the same time and understand its rules and gameplay better.

The rules of the Elder Scrolls Legends CCG are complex and may take some time to learn and adjust to, but this isn’t a downside at all as this would be the case for most of its counterparts also. Each player must have a deck that must be at least 50 cards in its size up to a maximum of 70 cards. Each card has at least one color representing one of the five attributes in this game. The attributes and their corresponding color are as follows: Agility(Green), Endurance(Purple), Intelligence(Blue), Strength(Red),Willpower(Yellow). The initial limit for each deck is two different attributes at once, however this can be bypassed if a player possesses a card with multiple attributes, and so up to 3 attributes can be played in a deck. When multiple attributes are combined together they create classes. For example, the combination of Agility (Green) and Strength (Red) create the Archer class. The combination of Endurance (Purple) and Willpower (Yellow) create the Spellsword class and so on. Of course a player also has the freedom to run a deck with only one single attribute also, and on top of that there are many cards that do not have an attribute and as such any player and deck can utilise them. Like all card games, this is a turn-based game so it is important that players be efficient with their resources as they can become vulnerable when it is no longer their turn. In order to mitigate the advantage that the player with the first move has, the second player is given a magic ring with the ability to increase his magicka by 1. This can only be used three times and after that the ring is destroyed. The magicka (a concept from the Elder Scrolls RPG series) is used as a mana that enables a player to make moves. Each card has a number that indicates its magicka cost to play, and with each turn the maximum magicka of the turn player is increased by 1. The truly unique aspect of Legends is its use of lanes to separate creatures. The playfield is divided in half  through the middle, with two lanes.  The creatures on the left lane can attack other creatures in the same lane. However, creatures in the right lane (also known as the cover lane) cannot attack a creature until after one turn of its being there as the name suggests. Creatures have attack points and defense points (something Yu-Gi-Oh! fans will love) and when they battle damage is done to their defense points, while the attack signifies their damage strength. Apart from battling other creatures, a player can attack another player’s health directly (another aspect of Yu-Gi-Oh! incorporated in this game). This is the gist of the rules, but there are more complexities to the game. Creatures have several unique abilities that distinguish them from each other, such as Guard and Charge to name a few.

According to the review aggregator Metacritic, Elder Scrolls Legends has received mostly positive reviews from the gaming community. The PC version has an average rating of 80/100 or 8 out of 10. Legends has many upsides that distinguish it from the hundreds of card games in what has become a crowded space as of lately. What makes Legends really great is how generous its reward system in PVE content is. Unlike other card games, this game balances its financial incentive to earn profit from selling good cards with player needs. It doesn’t withhold legendary creatures from new players. Compared with other titles the drop rates are equitable and on top of that it incorporates the legendary cards as a part of its levelling system. The game does a decent job of incorporating lore from all of the previous Elder Scrolls RPG games, most notably Skyrim and Oblivion. In the case of the latter, the same voice actor is used as the announcer in the playing Arena as the one from the original in Oblivion. Another great example of this is how Daedra are utilized; their abilities match the lore that is found in the Elder Scrolls series providing the players a sense that this game truly belongs to the same universe. The artwork and visuals in this game are splendid, something that you would come to expect from anything Elder Scrolls related as the games in this series have always proudly exhibited the rich depth of its scenery and aesthetic. The UI is also well designed making it relatively easy for new players to access different game modes, build their decks, and understand the game mechanics.

Verdict: This game is definitely a low investment treat for casual CCG players and for those who love the Elder Scrolls series as it does a good job of balancing the demands of both kinds of players. If you are looking for something super competitive and worth a lot of investment on the other hand, then maybe Hearthstone is still your best bet.

Everything You Should Know About Virtual Betting