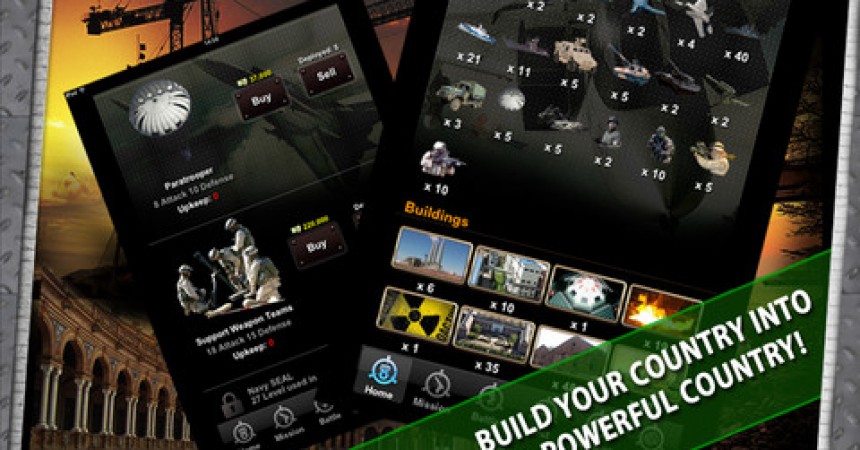 If you are in to massive online multiplayer games and own any iOS device, I would surely recommend you to take a look at this really dominating world war game – SuperPower™ – World at War!

[soliloquy id=”7031″]
It’s all about taking control of the world and heading to become a superpower not just by increasing cashflows and stockpiling the uranium, but by making smart decisions in your globe capturing mission. You can join hands with like-minded players online and start dominating the weaker countries with your stack of powers. As promised to ‘keep it far beyond the lateral progressions’ kind of games, SuperPower is takes complete advantage of modern type of gameplay to breed whole new type of gamers.

You can trash enemies by building ground, air & sea forces a placing them strategically to make the maximum damage to the enemy.  You can increase you chances of winning by using collected wealth of your empire but you have to make sure to manage every spending properly.  Along this way of war you have to collect uranium for becoming a mighty country in the world.Completing  the mission quests perfectly will allow you to gain access to more buildings, units and battles. All of which can be used for population growth, improving cashflow and to build uranium  production as well.

Despite of quite a vast theme overall, the game is engaging enough to play for a really long time but is not something we call as time-killer. It needs some time to understand what is going where are might become little slower for new user. Though if you get past first few things, it is engaging enough to make you addicted for the world domination.

The overall gameplay is impressive and as the game is really extensive & real-time online action it is always best to play with group of friends for its complete experience. SuperPower World at War is engaging, vast and quite impressive that I would recommend for those who love games of this conquer-the-world genre or who loves playing games with larger timelines.

A 101 Guide to Increasing Term Insurance

Use Of Smartphone In Our Daily Life (Infographic)