Despite the fact that most modern TVs come with their own Smart interface, which offers basic Internet connectivity and multimedia features, a lot of people still opt for a HTPC to get a full multimedia experience. Large bulky computers connected to TVs used to do the trick, but as time passed by, and gadgets started becoming smaller, users were not quite comfortable with having a beast of a PC connected to the TV. Even laptops

Even laptops seems to be outdated for this task, and that’s when dedicated HTPC boxes entered the market. This segment is fairly new, and manufacturers are still trying to figure out the best balance between size and features; out of all the offers out there, Pipo seems to have it right with the X7S mini PC. 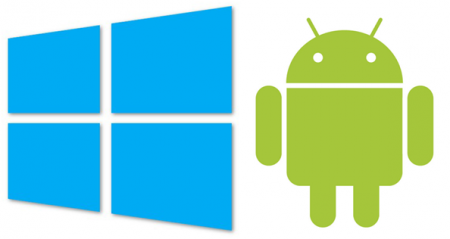 Pipo X7S at a glance

Pipo created the X7S to be small, stylish and powerful. Despite the fact that it is not bigger than your regular set-top box, the X7S still manages to squeeze in a powerful quad-core Intel processor, 2GB of RAM and 32GB of storage, along with plenty of connectivity options. The cherry on top, though, comes from the software side, where the X7S packs in not one, but two separate operating systems: Windows 8.1 and Android 4.4. 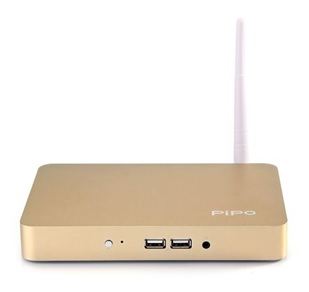 Measuring 188 by 150 by 24 millimeters, the Pipo X7S is a quite small, even when compared to other mini PCs. Its gold-color metallic case, which comes with rounded corners, gives it an exquisite look, somewhat resembling the Apple TV.

On the front side, there is a power button, two USB 2.0 ports and a headphone jack. No ports are present on the sides, just some cooling vents, while on the back side, there’s a HDMI port, LAN port, power port, micro-SD card port, another set of USB ports and a Wi-Fi Antenna.

The processing horsepower of the Pipo X7S is provided by a quad-core Intel Z3736F chip belonging to the Atom family, which is clocked at 1.33 GHz but can go up to 2.16 GHz when additional power is needed. Along with the processor, there are 2GB of DDR3 memory, which are soldered directly on the main PCB, therefore cannot be removed or upgraded – a standard option for mini PCs. In terms of storage, the X7S comes with 32GB of flash memory, which can be expanded via a micro-SD card of up to 64GB. However, you can also hook up an external hard drive to the X7S, or more, considering the fact that the unit comes with 4 US 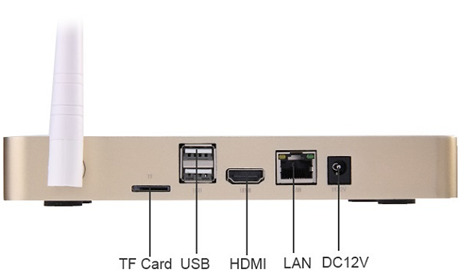 On the communications side, the Pipo X7S is decently equipped: 10/100 Mbps LAN port, Bluetooth 4.0 and Wi-Fi 802.11n connectivity, which should make it easy to connect it to pretty much any type of device or network.

As mentioned before, the software side is a strong point of the Pipo X7S. Most HTPCs come either with Windows, or Android, but none of them combine both. Pipo X7S does just that, and it does a fairly good job at it too. If you’re not happy with the pre-installed Windows 8.1 Bing edition (and there’s no reason not to be, as the installation comes surprisingly clean, with no bloatware), you can simply reboot into Android 4.4 and go on with that.

Pipo X7S – Good, but Not Perfect

The Pipo X7S has a lot of things going for it – the looks, the power, dual operating systems, and others, but that doesn’t mean it doesn’t have its downsides as well. For starters, the unit could use some USB 3.0 ports, considering that a lot of external storage units use the newer and faster standard. Speaking of faster, the LAN port could use an upgrade to gigabit speeds.

Another aspect, but one that’s a two-way street this time, is the fanless design: while opting for a fanless design ensured that the X7S is dead-silent at all times, it also means that the unit might get excessively hot under heavy usage. However, Pipo seems to have opted for the silence path, presumably on the assumption that the cooling vents and the metallic body will do a decent job dispersing the heat, which is actually correct for normal usage.

Overall, with a price tag of just $127.99, the Pipo X7S is a great bang for the buck if you’re looking for a dual-booting HTPC that’s small, elegant and powerful.

This is the guest post by Daniel Lewis, you can check out his great website full of games –  Parking Games 365!

Tech and gaming blogger since 2009. I spend my day exploring what's new tech and its impact on our day-to-day lives. From smartphones to electric cars, AI to EdTech, Business Tech to Gaming Hardware and beyond ... I write news, guides, and reviews on Digital Conqueror.
Facebook Twitter Youtube
PrevPreviousEssot Endorses Its Leading-edge Essot 004 Android Mouse
NextSpice Mobiles Launches Its First 4G LTE Smartphone – Stellar 519Next