UNSW Raises the Bar for Engagement and Impact

Australian universities are performing spectacularly well in global research rankings, with seven among the world’s top 100. This is impressive considering we have only 0.3 percent of the world’s population and face strong global competition, especially from China, the emerging research powerhouse. UNSW itself is on a stellar trajectory. Our university is 43rd in the QS World University Rankings, has risen 25 places to 71st in the latest Times Higher Education World University Rankings and, over two years, has made the leap from 133rd to 94th in the Academic Ranking of World Universities. 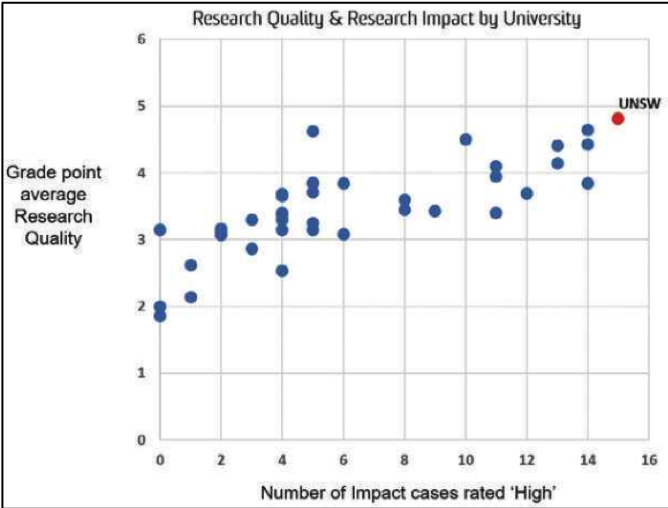 It is evident in our Centre for Sustainable Materials Research & Technology as it turns waste, otherwise destined for landfill, into green steel and products like benchtops and flooring. And it is evident in our new Fertility and Research Centre, which will offer fertility preservation for young people with cancer and rare genetic diseases. The success of countless world-leading innovations originating from UNSW, and from Australia’s university sector more broadly, is not just measured in the tenfold return on the public money invested, but in the lives they have changed and saved. However, Australian universities are somewhat constrained by our capacity to translate what we do. Too many projects reach dead ends and too many billions of dollars are lost overseas due to lack of investment in the translation, application and commercialisation phases of our research pipeline. UNSW has been vocal in its belief that greater collaboration between universities and industry is the key to remedying this.

Universities have unparalleled research infrastructure and networks, and the best research talent. Industry’s expertise lies in its understanding of societal needs, its real-time knowledge of what is commercially viable, and its capacity to mass produce, market and distribute. The success of the high-tech sector, for example, will rely on the expertise in design, science and engineering found in our universities. But the number of university-industry collaborations, as Education Minister Dan Tehan recently noted, is low compared to other OECD countries. Compounding this is the fact that direct Commonwealth investment in R&D has fallen to a 40-year low of just 0.5 per cent of GDP, compared to other OECD countries such as the US, China and  Israel,  which  invest 2.1-4.5 per cent of GDP. The 2016 Review of the R&D Tax Incentive and the 2018 report Australia 2030: Prosperity Through Innovation recommended a collaboration premium to pull industry towards publicly funded research institutions. The initiative could address a problem flagged by Scott Morrison when, as treasurer, he announced changes to the R&D Tax Incentive, citing a lack of industry research intensity.

A collaboration premium would incentivise partnerships across a richer spectrum and could be budget-neutral. Another idea we have proposed is an Australian Research Translation Fund as a non-health parallel to the Medical Research Future Fund. This concept became a recommendation in last year’s Parliamentary Review on Government Funding Arrangements for non-NHMRC Research. An ARTF would complement the research funded by the Australian Research Council, encouraging translation of the government’s priority research areas such as soil and water, energy, environmental change and cyber security. These are areas which underpin the prosperity and functioning of our communities and cities. The potential of a stronger collaboration framework for the two sectors is immense and one which Australian universities would welcome.

Tech and gaming blogger since 2009. I spend my day exploring what's new tech and its impact on our day-to-day lives. From smartphones to electric cars, AI to EdTech, Business Tech to Gaming Hardware and beyond ... I write news, guides, and reviews on Digital Conqueror.
Facebook Twitter Youtube
PrevPreviousInteraction with UNSW’s Dr. Tracy Wilcox, Academic Director for Postgraduate Programs in Business School
NextS P Jain Global Reports A Successful Placement Season For Its MBA Class Of 2019 With Over 50% Of The Class Securing International OffersNext