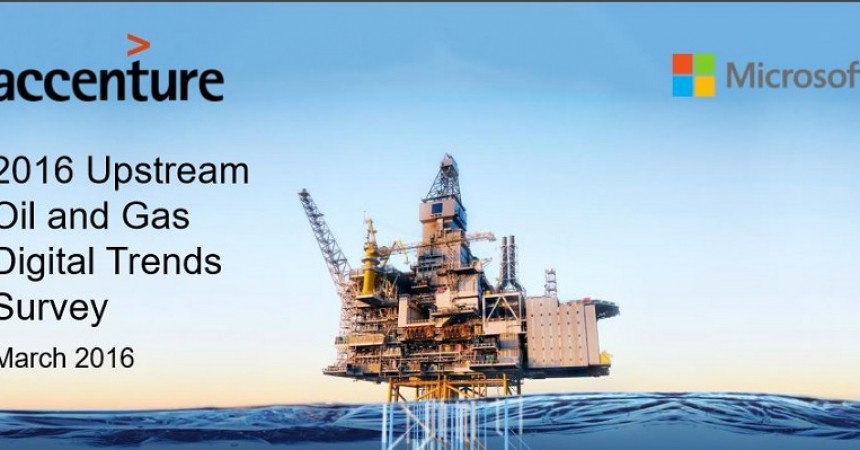 Over the next three to five years, 80 percent of upstream oil and gas companies plan to spend the same, more, or significantly more (30%, 36%, and 14%, respectively)  on digital technologies as they do now, according to the survey, now in its fifth edition. This continued investment in digital is due to respondents’ confidence that digital technologies can continue to help them drive leaner, smarter organizations.

More than half (53 percent) of respondents said digital is already adding high to significant value to their businesses. Cost reduction was identified as the biggest challenge that digital technologies can most address today, respondents said.  In addition, respondents reported that making faster and better decisions was the greatest benefit digital technologies can deliver (56 percent) and that one of the biggest barriers to realizing value is the lack of a clear strategy or business case, not the technology itself.

Today’s digital investments focus more on mobility, with almost three-fifths of respondents (57 percent) reporting having invested in mobile, compared to 49 percent of the respondents in last year’s survey. Next is investing in the Internet of Things (IoT) (44 percent) this year vs. 25 percent in 2015 and the cloud (38 percent), up 8 percent from last year.  Over the next three to five years, these investments are expected to shift more to big data and analytics (38 percent), IoT (36 percent) and mobile (31 percent).

“In the current challenging environment, the upstream oil and gas industry is focusing digital technologies on areas that help them work smarter and deliver significant efficiencies and savings in the short term while enabling them to make better decisions faster,” said Rich Holsman, global head of Digital in Accenture’s Energy industry group. “So, in the short term we expect these companies will continue to invest in areas that help lower operations costs through technologies like increased worker productivity with mobility, lower infrastructure costs through the cloud and drive better asset management through analytics.”

Respondents said digital’s biggest impact to date on the upstream oil and gas workforce has been increased employee productivity and engagement followed by better training and reskilling opportunities. They see the greatest impact from IoT in enabling connected field workers, with 60 percent of respondents planning to have field workers and assets digitally connected with smart devices.

The use of the cloud, respondents said, has shifted from being used primarily for infrastructure to an enabler of mobile tools. This trend is expected to increase in the next three to five years, as companies keep using the cloud to get faster and more value from other digital technologies.

“By taking advantage of the intelligent cloud, greater use of analytics and IoT go hand in hand with what we are seeing in our business today — the advent of the industrial Internet enabling the power of digital across the oil and gas landscape,” said Craig Hodges, general manager of the Gulf Coast District at Microsoft. “You can see this trend gaining traction from connected wells and intelligent pipelines to highly- efficient digital refineries.”

While two thirds (66 percent) identified analytics as one of the most important capabilities for transforming their company, only 13 percent felt their firm’s analytical capabilities were mature. Almost two-thirds (65 percent) plan to implement more analytic capabilities in the next three years to help address this need.

The “2016 Upstream Oil and Gas Digital and Technology Trends Survey,” sponsored by Accenture and Microsoft and conducted by PennEnergy Research in partnership with the Oil & Gas Journal, surveyed upstream professionals worldwide, including engineers, geologists and mid-level and executive management.

Drivezy Ties up With Honda Motorcycle and Scooter India to Offer 3,000 Vehicles Across Bangalore & Hyderabad