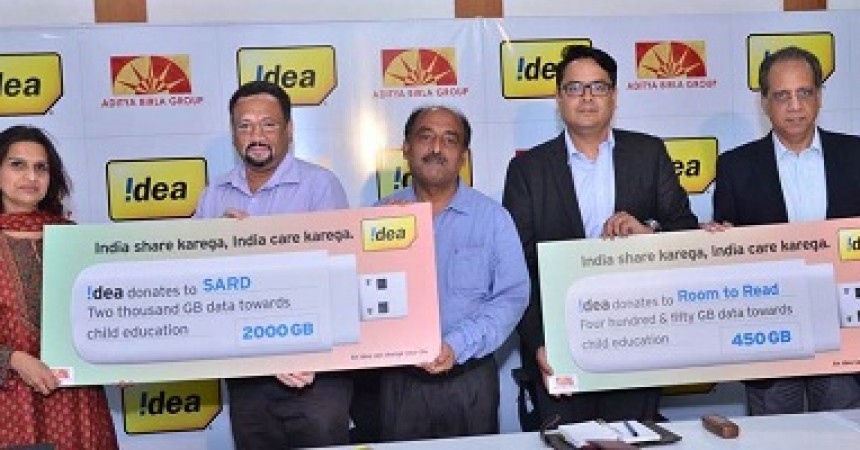 National, March 29th, 2016: With its Easy Share campaign, Idea Cellular; one of India’s leading telecom service providers created a platform to enable mobile internet users of the country to share data for the benefit of children. On the completion of this campaign, Idea handed over 2450 GB worth of mobile internet to the NGOs – ‘Room to Read’ and ‘Society for All Round Development’ (SARD) – pledged by mobile users for the cause of supporting child education.

Kick started in November last year, through its Easy Share campaign, Idea propagated the thought of transforming lives with the power of internet and urged mobile users in the country to ‘share internet’ with those in need. Amplifying the core essence of the campaign- ‘You Share, You Care’, Idea acted as an enabler and devised social & digital properties where people could actually become a part of the movement and come together to support the cause to ‘share internet’. To create awareness and gain the support in maximum numbers, Idea introduced various properties on digital – like a shareable website and on radio – ‘India sharing Season’ – to catalyze this movement that could make a difference in the lives of several children. Supported by aggressive on-ground activations, word-of-mouth through social and television ads, the movement expanded and channelized with it over 5 crore people who pledged their mobile internet data.

By the end of a month-long activity, a total of 2450 GB of mobile data was pledged through these channels. People made 2.5lakh+ calls on air to show the support and drove social media conversations with, 1.6 million+ likes on Facebook and 36,000+ tweets and 55,000+ visits on shareable website.

Talking about the campaign Mr. Sashi Shankar, Chief Marketing Officer, Idea Cellular said, “With every new campaign, Brand Idea aims at bringing new opportunities that empowers a society. Whether it is education, general awareness or a thing as simple as the feeling of giving or doing good, Idea has a unique way of depicting and reaching out to a wider audience. We are overwhelmed to receive such a fantastic response for our Easy Share campaign and as promised we are sharing the power of internet with Room to Read and SARD with the aim of supporting child education. It gives us great joy in having this campaign reach such heights with the active support of our audience.”

Idea Cellular has consistently been committed towards fostering data adoption across regions and continues to build upon these initiatives going forward.

SPICTRA Implements SAP H1 Business One ERP Across the Organisation