HONG KONG, CHINA – Media
OutReach – 12 June 2020 – Since
its early days, Hugill & Ip has
been extremely committed to promoting diversity and inclusion in the workplace
and in the community. The firm wholeheartedly encourages every form of
diversity,
as we believe in its power to add significant value to the workplace and the
community as a whole. Diverse
teams make better decisions, and in turn build a better society.

The firm
is engaged in spreading awareness for the need of anti-discrimination policies
and legislation, as well as actively participating in the fight against stigma
based on different grounds, hence the choice to support “Suk Suk 叔叔” has been a natural one. Biases against
sexual orientation, gender identity and even age are still rather common in
Hong Kong, both in the workplace and in society overall.

Suk Suk is a 2019 Hong
Kong drama film written and
directed by Ray Yeung. It presents the
story of two gay married men in their twilight years, but who are still in the
closet. One day Pak – a 70 year old taxi driver who refuses to retire – goes to
a neighbourhood park where he meets Hoi, a retired single father who’s a few
years younger than him. Despite years of societal and personal pressure, they
are proud of the families they have created through hard work and
determination. Yet, in that brief initial encounter, something is unleashed in
them which had been suppressed for so many years. As both men recount and
recall their personal histories, they also contemplate a possible future
together. Suk Suk studies the subtle day-to-day moments of two
men as they struggle between conventional
expectations and personal desires. The film also touches on the need for
retirement homes where people of different sexual orientations can feel
welcome, a reference to a very current topic of discussion in Hong Kong.

The film has won several awards both
in Hong Kong and overseas. Hong Kong filmmaker Ray Yeung’s latest work has
quickly become a critics’ favourite since its premier at the Busan Film Festival
last year. It was voted best film by the Hong Kong Film Critics
Society and Tai Po was voted best actor. It also gained five nominations,
including best film, at the Golden Horse Film Awards in Taiwan last November.
The film was screened at the Berlin International Film Festival, before
having a general release in Hong Kong a few weeks ago. The film recently earned
nine nominations for this year’s Hong Kong Film Awards: including
best film, best director and best screenplay for Yeung and best actor for Tai
Po. The film will be distributed by Strand Releasing in North America under the
title “Twilight’s Kiss” and will reach cinemas in late Autumn 2020,
kicking off in New York with Film Forum.

After the
private screening at Pacific Place, Adam Hugill, Ray Yeung and Travis Kong answered questions from the audience about societal and
legal issues, as well as about filmmaking and changing attitudes towards sexual
orientation and age-related issues.

Adam Hugill mentioned: “There are four
anti-discrimination ordinances in Hong Kong: together the ordinances protect
against discrimination on the grounds of sex, pregnancy, marital status, family
status, disability and race. Although there has been mounting discussion
regarding the introduction of specific legislation to prohibit discrimination
on the grounds of sexual orientation, and all public surveys have displayed a
changing of attitude favouring such legislation, no meaningful steps have been
taken by the Hong Kong Government since the introduction of the entirely
voluntary Code of Practice: Against Discrimination in Employment on the Grounds
of Sexual Orientation 20 years ago. No plan to introduce such legislation
is in the pipeline. All progress in prohibiting discrimination on the grounds
of sexual orientation has been made in various Court of Appeal and Court of
Final Appeal rulings. Twenty years ago, the Government published another
entirely voluntary Code of Practice: Practical Guidelines for
Employers on Eliminating Age Discrimination in Employment. However,
legislation banning discrimination on the grounds of age is equally unlikely to
be passed by the Government, despite it being supported by over 70% of Hong
Kong’s population”.

Ray Yeung commented: “Today in Hong
Kong the LGBT community is generally more open and the society is more
accepting of LGBT rights. However, older gay men have not been able to
enjoy these changes due to their adherence to strict traditional cultural
values and close family ties.”

The film director continued saying:
“Many of these older gay men, who had abandoned their own natures and
desires to fulfil their duties as sons continuing the family name, have
established close and rewarding blood ties to the families they created.
For these men, the love from their families is their life’s ultimate goal
and achievement. Therefore to ‘come out’ as an older man is a betrayal of
their lives’ work and self-sacrifice. For those who dared to come out, their experience in the gay
scene was not always welcoming. There are hardly any establishments which cater
for their needs. Some elderly men whom I had interviewed told me that they were
turned away when they wanted to visit a gay sauna. As we try to fight for equality,
we should also pay attention to the inequality within our community where
ageism, sexism and racism are common.”

Travis Kong added: “There are an estimated 50,000 to 110,000 older LGBT+ people living
in Hong Kong. This is not a small number. Whilst the LGBT community as a whole
is quite visible, older LGBT+ tend to remain hidden for two main reasons.
First, they are reluctant to “come out,” as they been hiding their sexual
orientation since their youth. Second, many of them engaged in a heterosexual
marriage when young, making it very hard to come out to family members. What
this population shares, however, is the loneliness of being old, single and a
sexual minority; the coming out dilemma (particularly challenging for those who
are married with children or grandchildren); the longing for same-sex intimacy
or to maintain their closeted same-sex relationship; the fear of getting sick;
and the frustration of being excluded from the youth-oriented, class-based LGBT
community. It is thus important to educate the general public, social service providers,
legal professionals and LGBT community to acknowledge their existence and be
aware of their specific needs and problems to work towards a more caring,
inclusive and tolerant society.”

They also exchanged views on these
subjects a few days earlier in Hugill & Ip’s office, as featured in the
video below. 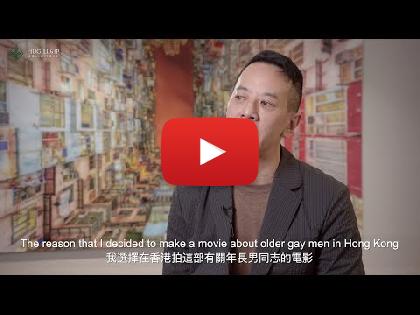 The film is distributed by Golden
Scene Co. Limited, a company
renowned for its diverse line-up of US hits and local productions. Winnie
Tsang, the managing director of Golden Scene, is a veteran in film acquisition,
distribution and marketing who established Golden Scene in 1998.