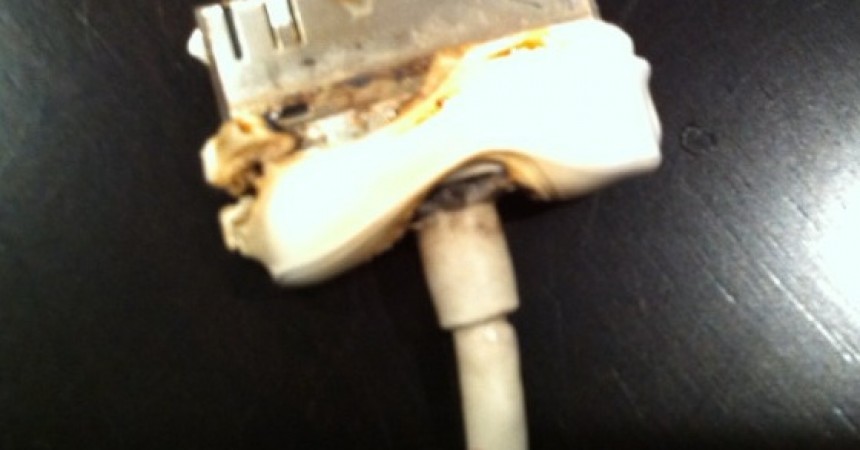 Everyone is a Fan of Apple iPhone and they are always just waiting to play around with there phones.

Apple launched iOS 5 Upgrade for iPhone 4 months back and there were many of us complaining about the flaws in it, and apple kept on fixing them.

Many have the complain that there iPhone’s are really getting too hot while charging them after they have upgraded to iOS 5.

The longer you charge your iPhone the hotter it keeps on getting. An iDevice Developer recently complained about his Charging Cable Caught Fire while charging the iPhone.

Gus Pinto is from Florida and he is an iDevice Developer. His Twitter Account says that his occupation is ” pioneering Mac desktop virtualisation ”

Pinto tweeted on 8th July on twitter as “My charging cable caught on fire while charging my iPhone 4 running iOS5.”

He has also given the screenshot of it. which is the above picture.

He had upgraded his iPhone to iOS 9 days back, mean burning of the cable was not an instant accident but he says that his iPhone used to get hotter while on charging after he upgraded to iOS 5 and then on the 9th day his charging cable caught fire.

This news was covered by Dev’s Team and hope Apple fixes this bug asap.

Many of you are luck that your cable are not catching fire while charging, but yeah you all must be bugged due to HOT iPhones.

If you guys are facing any more problem apart from hot iPhone’s while charging do let us know..??

How To Connect Tata Photon+, Netsetter, Netconnect+ In Ubuntu Linux