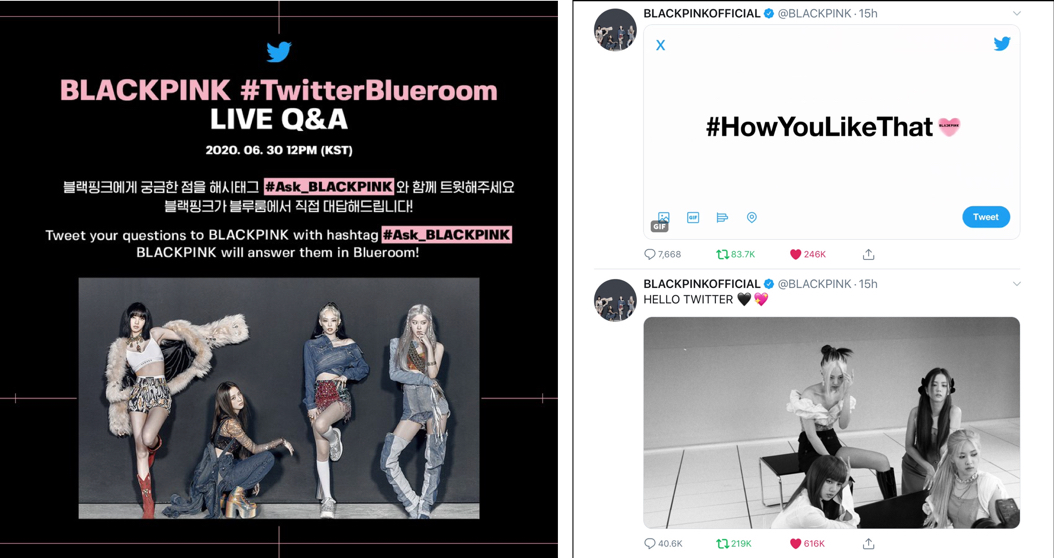 On 30 June, Twitter will host a ‘BLACKPINK LIVE comeback party’ as a #TwitterBlueroom Q&A session, to talk about  their comeback and current life. Fans will be able to watch the live #TwitterBlueroom on BLACKPINK’s official Twitter account (@BLACKPINK) and interact with them directly using the hashtags #Ask_BLACKPINK #TwitterBlueroom, or within the live chat room.

Twitter is also celebrating the launch of BLACKPINK’s official account and their comeback by setting up special custom emojis to help fans around the world cheer them on. BLACKPINK’s four members drew their own emojis, which can be activated by hashtagging their names. BLACKPINK’s special emojis will appear on all Tweets using the official hashtags from 26 June to 31 August KST.

BLACKPINK is one of the most beloved K-Pop groups and their official fanclub Twitter account ‘BLACKPINK GLOBAL BLINK (@ygofficialblink)’ was ranked no.1 fastest growing Kpop account, and ranked 5th in the ‘K-POP Artists’ most mentioned by Twitter users worldwide in 2019. It is expected that active communication with global fans will continue through the opening of this official account.

Articles published by guest staff who are not the part of team Digital Conqueror Media. This includes news, authored articles and other types of content.
Facebook Twitter Youtube
PrevPreviousMadame Tussauds Singapore Rolls Out The Red Carpet For Local Stars
NextYuexiu Commercial ” Yue+ Club ” will Grandly LaunchNext