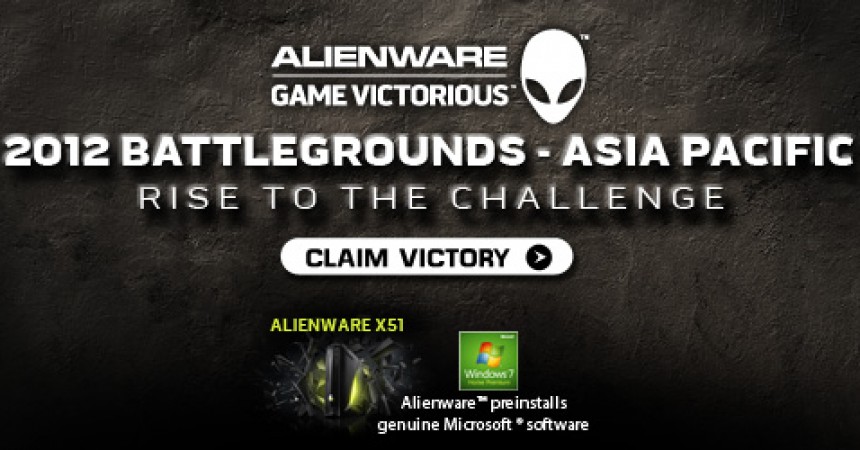 The battlegrounds tournament is tiered to cater for both elite gamers and game enthusiasts and will include DOTA 2, League of Legends and Team Fortress 2 in India.  All games have an online Open League category, with DOTA 2 divided into a special invitational online Elite League as well as an Open League[i].

The top teams from each game from within each country will qualify for the National Finals in October where an overall national champion team will be crowned.  USD$13,000[ii] worth of prize money will also be awarded to top performing teams across APJ throughout the duration of the tournament.

“The United Kingdom is not the only nation hosting a major games event this year,” said Frank Azor, General Manager, Alienware. “The Alienware Game Victorious 2012 Battlegrounds regional tournament is the perfect platform for international e-sports and is offering gamers across Asia-Pacific the opportunity to showcase their skills on the world stage while they attempt to game victorious.”

The DOTA 2 National Championship winning team will also earn the right to represent their country at the Asian Cyber Games DOTA 2 Grand Finals in Kuala Lumpur, Malaysia, on 8-9 December 2012, which boasts a total cash prize pool of USD$30,000ii. Alienware will also provide USD$10,000ii towards travel expenses to the winning team.

More than 15 million views are expected across Asia-Pacific on AlienwareArena, TwitchTV and YouTube.  Furthermore, through social media, gamers will be able to fully interact on AlienwareArena leaving comments and participating in polls which will influence the selection of matches broadcast.

To register a team at the Open Leagues Tournament[iv], visit the game pages below. Registrations are open till 29 July, 2012. To follow the latest news and updates for the tournament, visit www.alienwarearena.com/in-2012.

[i] Everyone who meets the registration requirements is eligible to participate in the Open Leagues. The top teams from each game’s online leagues will qualify for the national finals in each region – and battle it out to be the national final champion.

[ii] The prize money in each instance will be paid out to the winners in their local currency as per the currency conversion rates of the markets at the time of pay out.

[iii] Participants must have an Alienware Arena account in order to play, and be eligible for special giveaways.