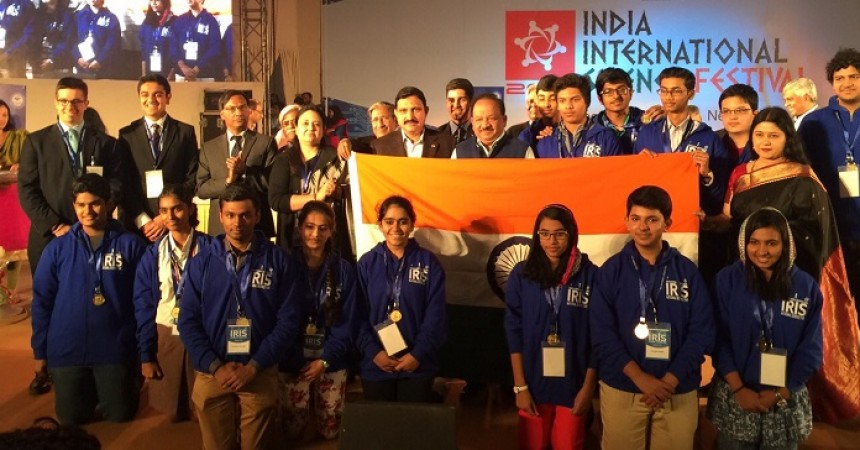 New Delhi, India, 9th December, 2015:  At a ceremony held at Indian Institute of Technology (IIT) Delhi on Monday, Intel India announced the finalists of the Initiative for Research & Innovation in Science 2015 (IRIS National Science Fair 2015), which aims to encourage problem-solving, research and systematic approaches through science and technology. ‘Team India 2016’ comprising of 12 selected projects from India’s next generation innovators will represent the country at the Intel International Science and Engineering Fair (Intel ISEF) in May 2016 at Phoenix, Arizona, U.S.A. The event also launched the IRIS Abstract Book which details the history of IRIS and synopsis of all the projects being showcased, along with IRIS Fair 2015 App, which will serve as a one-stop platform for participants to collaborate, interact and share information around IRIS 2015.

This year marked the 10th anniversary of the IRIS National Science Fair. Organized in collaboration with the India International Science Fair (IISF) along with the other DST sponsored science initiatives of INSPIRE and I3, IRIS received over 2900 project from across the country in 2015. The final round included a total of 151 students from 49 cities, and was assessed by a panel of 30 judges.

IRIS focuses on original research based projects and creates a platform for giving equal opportunity to children from Govt. as well as Private schools to come together as part of Team India 2016 and represent India to compete against 70 countries at ISEF.

Commenting on the occasion, Debjani Ghosh, Vice President, Sales and Marketing Group, Managing Director, Intel South Asia, said, “Intel is committed to STEM education, research and innovation in India. Through IRIS and Intel International Science and Engineering Fair, we catalyze innovation and provide a life-changing opportunity for the students to broaden their horizons and collaborate in research programs. It is very relevant today with the ambitious program like Digital India where the role of technology and innovation will be absolutely critical. ”

Intel ISEF brings together more than 1,700 high school students from over 70 countries, regions, and territories to showcase their independent research and compete for more than $4 million in awards and scholarships. Past winners at Intel ISEF have won plaudits for themselves and their nations, and several winners have had minor planets named after them.

The Initiative for Research and Innovation in Science (IRIS) is a public private collaboration between the Department of Science and Technology, Government of India, the Indo US Science and Technology Forum (IUSSTF) and Intel India which aims at empowering the next generation of innovators. With 4 national level mega-fairs – National Children Science Congress (NCSC), Science Fair by National Council of Science Museums (NCSM), Jawaharlal Nehru Science Fair by National Council of Educational Research & Training (NCERT) and Central Board of Secondary Education (CBSE) Science Exhibition affiliated with IRIS, it has emerged as the largest research-based science fair in India. IRIS has been able to reach over 3 million students through its affiliation with other fairs. This year, the INSPIRE Awardees of 2014 were also invited to send in their projects to participate in the IRIS National Science Fair.

NEFIN collaborates with St. Paul’s College on Solar Energy Projects with a mission to create a sustainable future through educating students

Indus OS Raises Series A2 Financing With VenturEast And JSW Ventures As New Investors; Omidyar Network Continues Its Participation In This Round