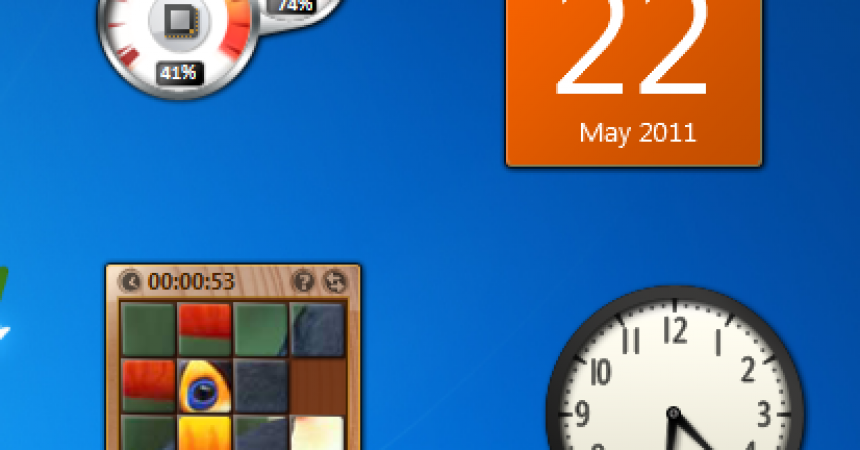 Many people like clean, sleek and few icon set on desktop but there are some handy Desktop widgets offered on your windows desktop that can totally improve your productivity. I would like to review best of them, which I am using daily & would like to let you know whats good about it.

Google, a well known name on the web has its own Desktop sidebar with gadgets. The key features of Google desktop are as follows:

Yahoo, being a competitor of Google, also has its Desktop client called “Yahoo Widgets”. Basically, as all the Widgets/sidebars/gadgets do, it also helps you in many small steps. On finding that Google and Yahoo have made products for Windows users, Microsoft also launched its “Gadgets” with the launch of Windows 7. With Windows 7 Ultimate edition, package of several useful gadgets including Clock, Calendar, Weather, Slide show, puzzle game etc. Comes in hand and other much stuff can be downloaded by clicking on more gadgets from the gadgets window. Rainmeter is a desktop client which is widely used. I found it best among all. It was unexpected that another gadget will beat Google, Yahoo and Microsoft.

I didn’t find any.

It’s the era of style and stability that you always want to carry around.  We rate the Rainmeter as the best gadget considering the overall performance of it. Let us know your opinion about windows desktop gadgets in comments section below.

Social networking and Gadgets are indispensable parts of my life. I am just 15 & love to write about tech stuff. Looking forward for making career in IT.

Artificial Intelligence In The Lead!

Can You Purchase A New Car and Save Money?

How to Instill A Corporate Work Ethic in Your Workforce