Computer performance deteriorates over time, and if you use it virtually every day, problems begin to emerge. You may encounter frequent slowdowns, functions that do not perform as intended, and sudden shutdowns. These are warning indicators that you should never ignore since they might cause irreparable damage to your computer. This is why you must check your computer’s performance and do CPU stress testing to keep your CPU and overall computer health in good working order.

We strongly recommend using programs like HWMonitor, HWiNFO64, or Core Temp to monitor CPU temperature, clock rates, and power before doing these tests. These may be helpful resources for ensuring that your cooling solution is working properly, as this stress tests physically push your CPU to its limits.

What is meant by CPU Stress Testing?

Stress testing is a sort of performance testing that analyses a system’s stability under high-stress conditions. It assists in ensuring that components are working effectively and determining how much stress they can withstand before failing. Extreme tasks, workloads, thermals, memory consumption, and clock rates may all cause stress.

When it comes to CPU stress testing, many people have second thoughts about its safety. CPU stress testing is safe if done appropriately. A CPU typically achieves its maximum temperature in an hour under a given load. When it hits a critical limit, the computer will shut down automatically to avoid any more harm.

We’ve listed six apps for stress testing GPUs that are largely free for personal use. If you want a prolonged duration of loop testing, you may need to purchase an advanced edition of the application. Nonetheless, here are the software packages that will allow you to overclock and evaluate the stability of your GPU. Here is the list of best CPU Stress Test Software for gamers and developers

Add Maxon Cinebench to your list if you want to know how your CPU performs. This cross-platform test suite makes it simple to assess the performance of your PC. It provides powerful rendering and CPU technologies to correctly evaluate computer hardware capabilities. Cinebench assists system administrators in purchasing decisions, journalists in reviewing hardware, and hardware makers in improving their most recent products. The new Cinebench delivers exact findings for next-generation CPUs to determine whether a laptop or desktop’s cooling system is adequate.

It will also assess whether the computer is stable while under heavy CPU load and capable of handling 3D workloads efficiently. Cinebench results are updated when the compiler and code change, therefore current scores cannot be compared against earlier ones. Allow Cinebench to run in the background to provide a variety of outcomes by changing the measurement. Instead of performing a single run, the most recent version may perform a 10-minute thermal throttling test. This can be important for determining how far you can push a given system before it overheats. In the advanced settings, the single run is still accessible.

Unigine develops one of the world’s greatest gaming engines. Aside from that, it provides a few gaming tests that will thoroughly stress your GPU. Superposition, Heaven, and Valley are three common exams. You may use any of the tests stated above, but Superposition will actually tax your GPU. It’s a difficult exam that generates complex images using the powerful Unigine engine. 900 interactive items with dynamic lighting technologies and VR module testing are also part of the test. Meanwhile, you may monitor GPU utilisation, temperature, power supply, cooling system, FPS count, and other parameters. The nicest thing about Unigine, and especially Superposition, is that it creates an engaging world that even the most detailed games lack. Furthermore, you may stress-test the graphically intense environment for a long period of time to ensure GPU stability. Not to add, Unigine provides a benchmark score, allowing you to quickly compare your GPU result to other computers across the world. However, if you want to stress-test your GPU for longer cycles, you may use Heaven and Valley. They are pretty nice and provide a lovely yet challenging atmosphere. To summarise, Unigine is a comprehensive stress testing solution that covers testing, monitoring, and benchmarking.

MSI Kombustor is a well-known MSI tool for stress testing and GPU benchmarking. It’s specifically designed to drive your graphics card to its ultimate limit with a series of demanding simulations and demos. MSI Kombustor, among other things, evaluates thermal performance and tests the GPU’s stability. To get the most out of MSI Kombustor, utilise another MSI programme called Afterburner. It’s an MSI overclocking tool that provides you complete control over your graphics cards. You may change the fan profiles as well as the clock frequency and voltage of the GPU. 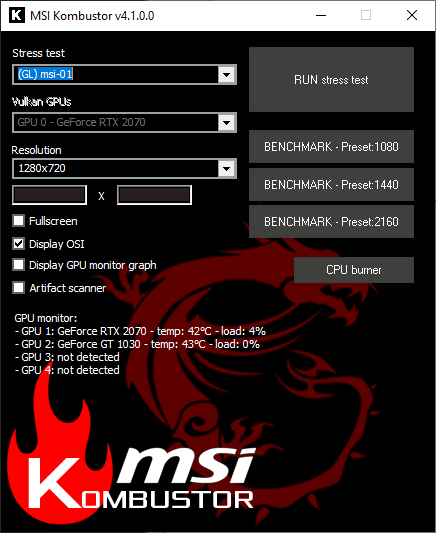 It will enable you to achieve the ideal balance of performance and temperature. The Kombustor, on the other hand, supports all main graphics APIs (DirectX, OpenGL, and Vulkan) for testing GPU performance in all settings. Aside from that, MSI Kombustor places an absurd amount of strain on the GPU with a variety of complex tests like as Artifact scanning, PhysX 4 GPU stress testing, Tessellation, Depth-of-Field testing, Physically based rendering, and more. Furthermore, it makes use of Furmark’s very intense testing to put the GPU to the test. If you have a high-end graphics card, MSI Kombustor is one of the best tools for stress testing GPU.

The IntelBurn Test, despite its name, is not created by Intel. It does, however, employ Intel’s Linpack benchmark to calculate the time required to solve a system of linear equations and then turns it into a performance rate. This is the same engine that Intel used to stress its own CPUs before delivering them. The UI is straightforward and simple to use. You may choose how much the CPU is taxed, how many times the test is conducted, and how many threads are executed. While this may be more accurate than Prime95, it also has a reputation for pushing a CPU much beyond its regular limitations, maybe even more than Prime95. While doing testing, keep an eye on the heat output. Furthermore, while it is theoretically compatible with AMD CPUs, it may be preferable to utilise alternative benchmark programmes instead.

JAM Program GmbH created Heavyload, a System Utilities Benchmarking software. HeavyLoad stresses your PC or server by writing a big test file to the temp folder, allocating physical and virtual memory, doing difficult computations, and drawing patterns in its window. HeavyLoad is a free PC hardware stress test programms that may be installed in any edition of Windows and server versions (64-bit and 32-bit) that Microsoft presently supports. 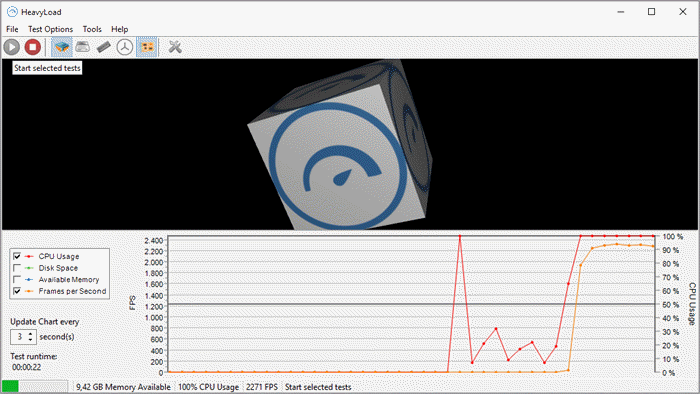 HeavyLoad lets you put the server PC or workstation through its paces and conducts a test to verify if the PC hardware is reliable. It can do checks on all system components such as the GPU, CPU, RAM, Hard Disk, and so on. The freeware stress tool provides an easy-to-use graphical user interface and visible feedback, allowing you to operate the benchmarking programme without being an expert. Configure the tool or select complex parameters from the Options page based on your needs, such as used CPU cores, time restriction, and so on. The Windows Task Manager will allow you to rapidly examine the system’s performance. Download the most recent version of HeavyLoad in.exe or.zip format to get started immediately with installation and setup.

Aside from the CPU test, AIDA64 Extreme also includes a GPU stress test called the GPGPU Benchmark test. It contains a system stability test that incorporates the GPU, and you may do a series of graphically intense activities to push the machine to its limits. AIDA64 Extreme employs a 64-bit multi-threaded stress testing module and the OpenGL API to fully use the GPU. Having said that, the finest feature of AIDA64 Extreme is its ease of use. Even under extreme duress, you will receive statistics such as power consumption, GPU utilization, frequency, temperature, and more. 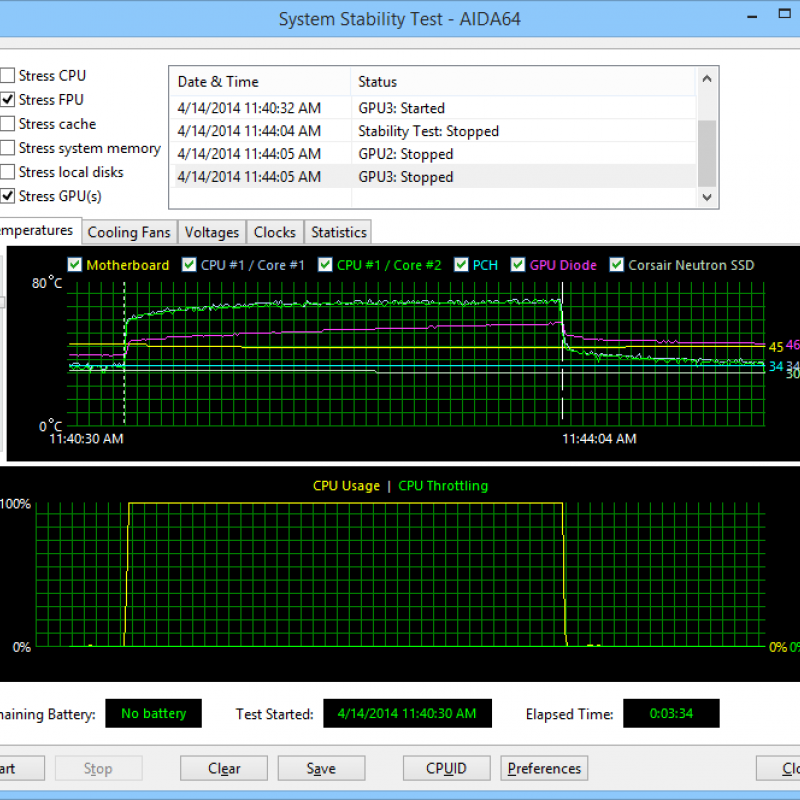 Simply told, AIDA64 Extreme is an excellent place to start if you are new to this area and want a basic programs to stress test the GPU. AIDA64 Extreme offers an unequalled hardware detection engine in its class. It gives thorough information about installed applications, as well as diagnostic functions and overclocking help. It can gather precise voltage, temperature, and fan speed information since it monitors sensors in real time, and its diagnostic capabilities assist discover and avoid hardware faults. It also includes a few benchmarks for testing the performance of specific hardware components or the entire system. It works with all 32-bit and 64-bit versions of Windows, including Windows 11 and Windows Server 2022.