After announcing the high-end Nokia Lumia 800 model at Nokia World 2011, London, They announce another Windows phone device which is priced in mid range and with quite powerful specifications.

Nokia Lumia 710 is the what they called this shiny new Windows Phone 7 device which is sporting powerful  1.4 GHz Snapdragon processor with 3D hardware acceleration & 512 MB RAM

This device hardware is similar to its high-end brother Lumia 800, the major difference being its 8GB internal memory istead of 16GB in Lumia 800.

I have covered Complete Overview of Nokia Lumia 800 already, click to know more. 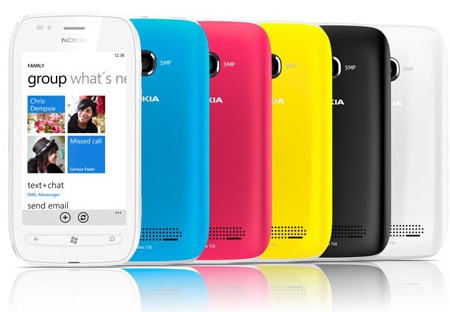 Lumia 710 is sporting big 3.7 inch display which is quite bigger considering it is a mid range device. You get 480×800 px resolution which is WVGA instead of AMOLED. You also get the clear black Nokia display which shows clear distinction of color on-screen. Moreover you can see clearly in sunlight thanks to this clear black display. LCD screen looks great because I am owing  HTC surround that have similar screen & Windows Phone  OS looks very clean and beautiful on it. The display is flat and not curved one like the Lumia 800.

Again you get same 3 Capacitive buttons on the phone – Windows Home, Search & Back, which are more than enough to access the live tile based windows UI easily.

As Nokia is one of the master manufacture in the camera department, Lumia 710 is not left behind at all. They have stuffed this phone with 5MP camera with LED flash for taking high-resolution photos. The camera interface is same provided by Windows Phone OS. Note that there is no front facing camera in any of the Nokia devices yet. Because Windows Phone 7 is not natively supporting the video calling till date but support is expected in the update coming next year named Tango.

There are two camera buttons on the side & one dedicated camera key which can be used to access camera directly even when the screen is turned off/ locked.

This phone is little bit thicker than Lumia 800 and have made of little bit cheaper material. The phone itself won’t give you a premium feel from as far as body is concerned but the performance remains quite high thanks to Windows Phone 7.5 (Mango) OS & its 1.4 GHz processor.

One unique thing I would like to mention about the Nokia Lumia 710 is, it’s the only Windows phone in the market that comes with inter-changeable back covers. And it comes in the color option of Windows tiles & its like they are giving away tens of back cover option as per your mood. I am not sure yet about how much they will provide in packaging, but its will be great to have as an added option.

The phone was previewed at Nokia World 2011 and expected to launch in early 2012. The prices are not revealed yet by Nokia but hopefully it will be priced at around 270 euros.

teamLab Planets in Tokyo Opens a Dining Experience, an Art Space, and a Flower Shop on October 8

teamLab Planets in Tokyo Opens a Dining Experience, an Art Space, and a Flower Shop on October 8

PPRO today announces its integration of the PayPal Commerce Platform.   The move further cements PPRO’s market-leading position as one of the go-to providers of