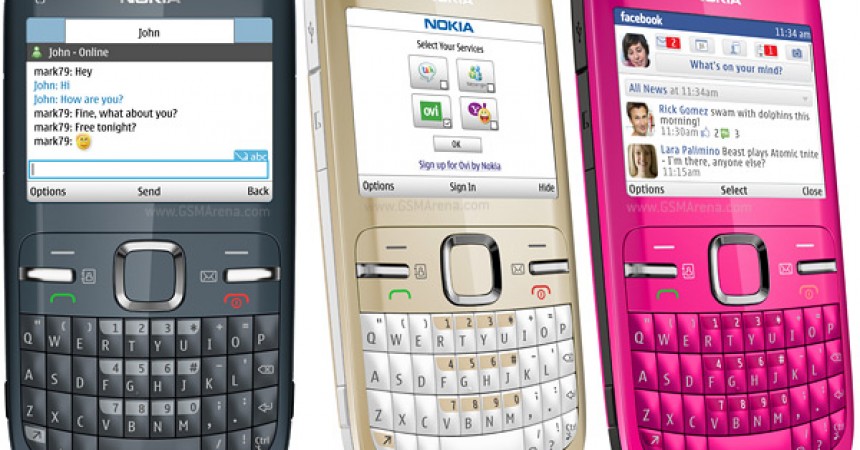 Recently our Team have started posting on Flaws of the mid range cell phones in the market.

We have discovered the Flaws in LG Optimus One and Nokia X2-00, and now this time we are going to explore the bugs in Nokia C3-00 cell phone.

This is a QWERTY S40, Wi-Fi Enabled mobile from Nokia which have a few flaws and bugs as many other cell phones in this range. Flaws and Bugs in Nokia C3

# As per Nokia Ovi Contacts Synchronization is possible from Nokia C3, I have tried it lost of time but still unable to do it.

# Sound Quality of the Speakers is very low, and also there are many distortion in it.

# The Mail and Communities Application promise to work in the Background and provide you with the latest updates on your network at you specified set timings, but this service is not reliable as it works as per its mood and never perfect.

# The Ovi Store App is very slow and also have bugs, it was not working when I bought this cellphone but after Upgrading the software its working somewhat fine.

# It is wi-fi enabled and works very much fine but gives a restart sometimes while choosing a wi-fi network, Nokia Care was also unable to answer this flaw.

# There is proper Update for Nokia C3, as I have updated a couple of times and it gives some software related issues, later on reinstalling the update they are fixed.

# The GPRS Modem Connectivity is very slow as compared to other Nokia Phones of same configuration.

# All the Java Apps (.jar and .jad files) are supported but after you upgrade your firmware you are gonna loose this freedom and only the Apps downloaded via Nokia App store are gonna work, also, there are issues with the Nokia App Store, which keeps us helpless.

# Sometimes there is Bluetooth File Sharing problem between Windows and your phones.

# There is also a Connectivity Flaw regarding using internet via WLAN and GPRS in different App, which is resolved, you can get the solution here.

# Also, there are issues with the Internet Connectivity on a PC or Laptop Via Bluetooth using Nokia C3 as modem, which is also resolved and you can view the solution here.

# Also, if there are around 1000 messages in your phone it makes the working very much slow and results is No Response and automatically it gets restarted.

#  The Camera Quality is also not that much fine.

# You cannot choose particular set of messages from your Inbox to delete as it lacks marking facility.

I myself is using Nokia C3-00 and have faced these problems, if I found any more flaws or say solution to Nokia C3 Bugs, I’ll surely keep you updated.

IMDb Android App gets an Update with International Movie Times