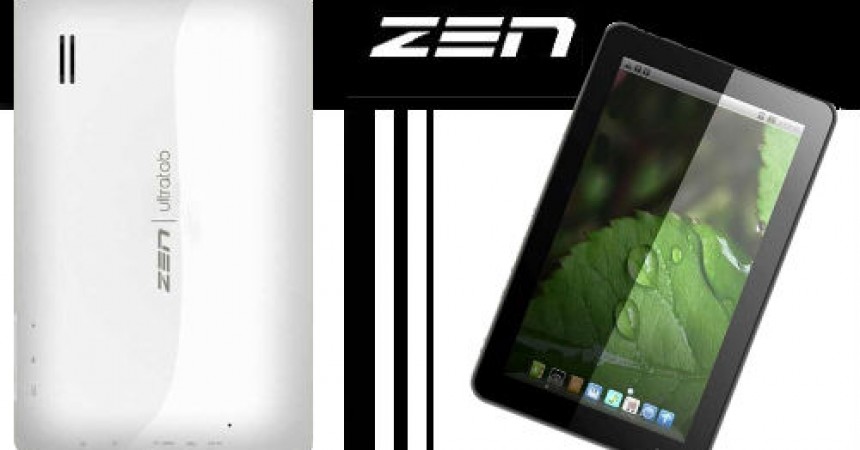 Zen Mobile has recently unveiled the Zen UltraTab A900 for just Rs. 7,999. Zen UltraTab A900 is an Android 4.0 ICS based tablet which has got 9 inches of display and is hosted with pre loaded Android apps. Zen UltraTab A900 runs on 1.5 GHz processor and has got 512 MB RAM. The resolution of this tablet is bit low and it offers 800×480 pixels which is significantly less as compared to other tablet in the same category. However it does offer important features like 5 point multi touch and has got the connectivity assets like 3G via USB dongle, micro USB slot, battery backup of 3.5 hrs on video run and close to 14 hrs on WIFI. Other than this it has got 1.3 MP camera, internal memory of 4GB which is expandable up to 32 Gb and complete access to Google Play.

Pre loaded apps like ibibo, bollywoodji, Mapmyindia, paytm, music hub, readers hub, rummy, nimbuzz are pre-installed in this all new tablet. With UltraTab A900 Zen has also introduced their proprietary skin called ‘Ultra Tab Sense’ which is featuring 3D Home display and many other widgets.

Zen UltraTab is no doubt an impressive tablet with all the necessary features along with power of Android 4.0 ICS and powerful processor. It has got appeal which surely will attract the youngsters, professionals, games and students.

As the education has now taken a turn to e-learning, tablets like Zen UltraTab A900 would be a great boon and facilitator for online and distance education.

Watch IPL Cricket 2011 Live On GPRS For Your Android

Nokia X Family Announced in India: Best of All Worlds Comes To Life!