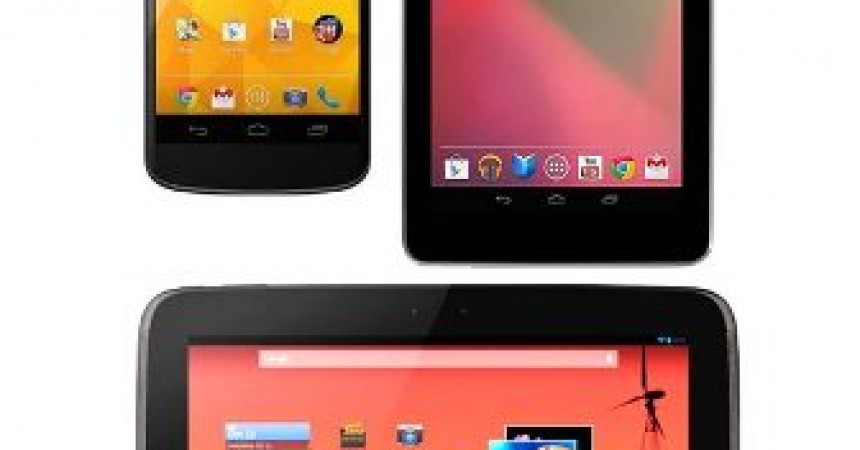 It has been a classic and a historical last 2 weeks, where we came across the most talked about and the awaited devices from Apple and Windows and now it’s the time for search engine giant to show the charisma. After the announcement of iPad Mini, Windows 8, it’s the time for the show of Nexus. Google was supposed to showcase the much awaited Nexus devices on October 29th, but unfortunately they called off the event due to Hurricane Sandy which hit the East Coast. However Google has cross all the hurdles and has unveiled the bunch of most awaited product namely, Google Nexus 4 which they came up with LG, a classic Nexus 10 tablet which is in collaboration with Samsung and a refresh Nexus 7 tablet.

Nexus 4 is an Android 4.2 based smart phone powered by Snapdragon S4 Pro processor and has got 2GB of RAM. It has got the engineering from LG and it’s the same smart phone he pics of which got leaked out few days back. With the resolution of 1280×768 pixels on the True HD IPS Display panel, it is also equipped with 8MP camera. Nexus 4 unlocked device would be available Google Play from November 13th and it will be coming in two variants. 8GB Nexus 4 would be costing USD 299 and for 16 GB you have to pay USD 349.

The next Premium device is Nexus 10 which is an exclusive slate which is supposed to be an ideal alternative for Apple New iPad. Designed with the edgy curves, this tablet has got the power of Samsung Exynos 5250 dual-core 1.7 GHz processor and it comes with 10 inches of display enabling the resolution of 2560×1600 pixels. Nexus 10 has got 2 GB of RAM and with the gorgeous looks; it’s a powerhouse which is available in two versions. You can get the Nexus 10 16 GB model at USD 399 and for 32 GB you have to pay USD 499.

Last innovative charisma from search engine giant is the true competitor for Apple iPad Mini, Nexus 7 is something which surely be the choice of everyone in the 7 inches category. With the features like Android 4.2, 3G, HSPA, this charismatic tablet is available for USD 199 (16 GB variant) and for 32 GB you need to pay USD 299.

All these devices are expected to be available from November 13th on Google Play and onward this its will be released in countries other than US. No official words have been spoken on the price and availability in the India.